20 killed, over 100 missing as hanging bridge in Gujarat’s Morbi collapses 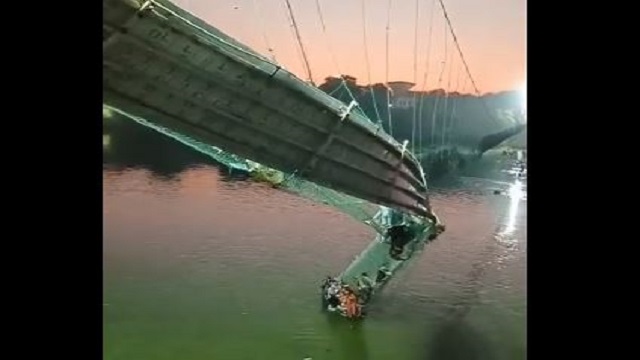 Morbi (Gujarat): At least 20 people were killed while over 100 went missing after the hanging bridge on the Machhu dam in Gujarat’s Morbi collapsed this evening, officials said.

While speaking about the tragedy, Morbi city Congress chief Rajeshbhai Kavar said the accident occurred when more than 500 people, including children, had come to see the hanging bridge as it was Sunday and Diwali vacations are on.

It is to be noted here that the hanging bridge in Morbi was closed for the last two years and was reopened after renovation just a day ago.

This is India’s first rarest blood group found in Gujarat

On being informed, several teams of the rescue and medical emergency personnel were being rushed to the spot.

Prime Minister Narendra Modi has learned about the incident and has instructed the state machinery to rush all help to Morbi administration and speed up rescue and emergency medical services.

Morbi MLA and Minister Brajesh Merja said that due to night and water flow in the river, locals and fire brigade teams are finding difficulty in carrying out rescue operations. Fire teams from surrounding districts too were rushed to Morbi to speed up the rescue work.