1.5 km long queue begins from 4.30 am in morning here for Biryani: Watch 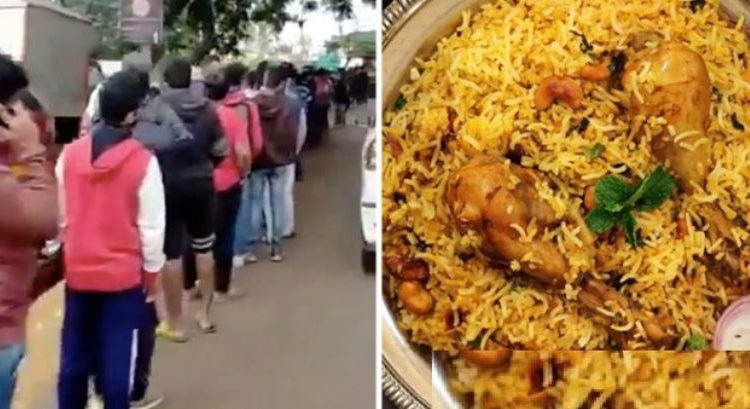 Although it seems unbelievable, but it is a fact that people form massive queue that is approximately spread up to 1.5 kilometre at a famous Biryani shop in Bangalore of Karnataka on most Sundays.

One of the customers in the queue said that he stood in the line from 4.30 am and at about 6.30 am his turn came to order biryani.

A Twitter user Kaveri posted about it on her handle and captioned it, “Queue for biryani at Hoskote, Bangalore. Tell me what biryani this is and is it free?”

Queue for biryani at Hoskote, Bangalore. Send by @ijasonjoseph
Tell me what biryani this is and is it free? pic.twitter.com/XnUOZJJd2c

7 aborted fetuses in bottles get spotted drifting in drain…

Along with other specialties, Indians are also known as food lovers. A large variety of Indian recipes perhaps make many of us foodie, and there is nothing wrong in it. That is why sometimes we come across such uncommon events.

Titled ‘Anand Dum Biryani’, this Biryani shop of Bengaluru is catering to the need of people with tasty biryani for the last 22 years.

Karnataka: Owner of the eatery says, “We opened this stall around 22 years ago. No preservatives are put in our biryani. We serve more than a thousand kilograms of biryani in one day.” https://t.co/HXOO1Ibfyn pic.twitter.com/dejRDm5OUP

Like other business centres, this Biryani shop was also closed for months due to lock down. Soon after its re-opening following lock down, it has so far managed to garner almost the same number of customers, which it had before the lock down.

Talking to ANI a customer said that he reached the spot at 4 am stood for two and half hours to order biryani at 6.30 am in the morning. But he is happy and says that the food was too delicious and it was worth waiting.