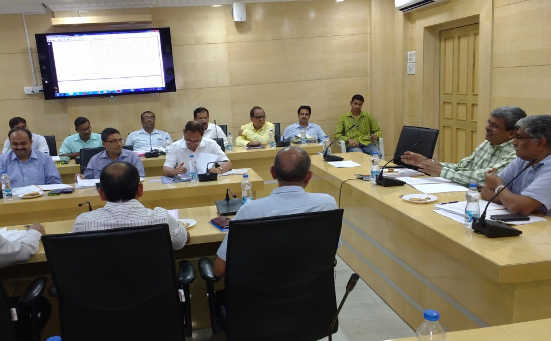 Bhubaneswar: The State Level Single Window Clearance Authority (SLSWCA) meeting held under the Chairmanship of Chief Secretary Aditya Prasad Padhi at the secretariat conference hall today afternoon considered two new investment projects involving the investment of Rs. 4,329 crores. Out of these two projects one was given in principle approval in the committee and the other was recommended to the High Level Clearance Authority for consideration.

The investment proposal of M/S Richbird Drinking Water Private Ltd to set up a structural steel fabrication unit at Kalunga in Sundargarh district with an investment of Rs.53 crore was approved in the meeting. The proposed unit will have facilities for fabrication of ducting and miscellaneous items of general steel fabrication with an installed capacity of 12, 000 MT per annum. It will create employment opportunities for 185 persons. Around 19 acres of land needed for the unit has already been identified at Kalunga. The water requirement is only around 10 cu m per day for drinking and other general use. The company would use the mild steel and stainless steel channel, plate and angles as its raw material.

The   proposal of GAIL (India) Ltd for supply of natural gas in major industrial hubs and city gas distribution for Cuttack and Bhubaneswar with a total investment of Rs. 4,276 Cr was considered in the meeting. The company will have its natural gas pipeline in the districts of Bhadrak, Jajpur, Dhenkanal, Angul, Jharsuguda, Sundargarh, Sambalpur, Deogarh, Cuttack, Kendrapara, Jagatsinghpur, Puri and Khurda. It needs a total of around 51 acres of land in various locations for sectional valve, pigging station, dispatch/receiving terminals, city gas stations, pipelines etc.  The project has employment potential of 1,141. SLSWCA, after examining different dimensions of the project, recommended it to the HLCA for consideration.

The Committee also reviewed the project facilitation work of Dist Level Single Window Clearance Authorities, Regional Industries Centers and District Industries centers. Review revealed that so far these committees have considered 321 projects with investment potential of around Rs.1147,28 crores and employment potential of 11664.  As of now, 25 industries have started production, and 86 are in various stages of completion. Chief Secretary Padhi asked Director of Industries to follow up the sanctioned projects and provide them necessary hand-holding support till the stage of their commissioning and production.