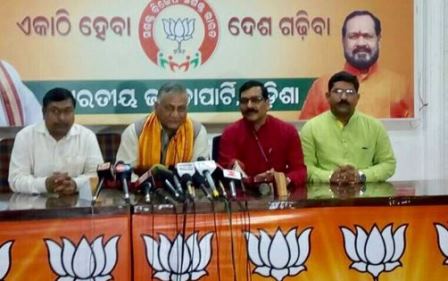 Bhubaneswar: General VK Singh, Minister of State, Ministry of External Affairs, played down the demand by the Odisha Government for conferment of’ Special Category’ status to the State, stating the Centre had already launched a lot of welfare schemes for states including Odisha.

“The revenue share of states has been raised from 32 per cent to 60 per cent. Not just Odisha, every state is being benefitted from the welfare schemes of the Central Government. When the states are getting the required assistance, why is there a demand for special category status?” asked the Minister while addressing media persons at the State BJP office on Tuesday.

The Minister also condemned the comments of Congress leader Sandeep Dixit who called the Army Chief as ‘Sadak ka Gunda.’

General Singh also addressed ex-servicemen at the Sabka Saath, Sabka Vikas sammelan in Bhubaneswar, where he raised the One Rank, One pension issue.

“Modi ji tried to bring One Rank, One Pension for all the ex-servicemen. But a section of them made demands, lost patience and the whole process was delayed. What could have been achieved easily, is now facing hurdles. But I assure you, we will ensure the demands are met.”

+2 cut off marks out; Ravenshaw most sought after in Science stream