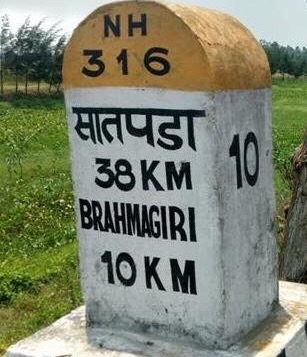 Odisha CM Naveen Patnaik has written a letter to Union Minister for Road Transport, Highways and Shipping Nitin Gadkari, seeking his immediate intervention to ensure Odia inscription on all milestones on NH roads passing through the State.

There has been a massive outrage over non-inclusion of Odia in Milestones across several districts in Odisha while English and Hindi were given importance. Social Media users even signed petitions and asked the CM to take up the case with Gadkari.

“It is a matter of grave concern that the local language Odia has mostly been ignored in place identification/destination boards and in the kilometer stones on the National Highways throughout the state,” Patnaik wrote in a letter to Gadkari.

The 2004 circular, which states that all information boards should invariably inscribed in three script – local, Devnagari and Roman, is not followed by NHAI. Naveen expressed concerns over the apathy and defiance of the officials and urged Gadkari to look into the matter.