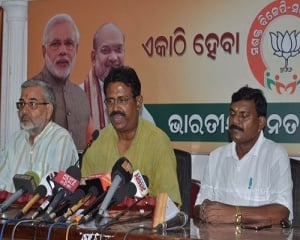 Sharpening its attack on the ruling BJD, the Odisha unit of BJP on Saturday alleged that Maheswar Mohanty was made Revenue Minister in the recent reshuffle of the Naveen Patnaik government to benefit the Vedanta.

The saffron party also raked up the Minister’s alleged involvement in Swargadwar and Sipasarubali land grab scam in Puri.

“Maheswar Mohanty is a land broker. He is embroiled in Swargadwar and Sipasarubali land grabbing scam. BJD made him the Revenue Minister of the state only to facilitate handing over Lord Jagannath’s land in Puri to Vedanta,” alleged BJP spokesperson Sudipta Ray.

The Revenue Minister dismissed the BJP allegation terming it as baseless.

“I have not encroached upon even an inch of land. The allegation of BJP is baseless. BJP is leveling the allegation without doing its home worky only to get publicity in the media,” said Mohanty.

10,000 Youths to get Entrepreneurship Training this fiscal