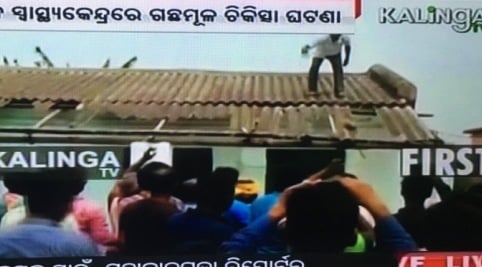 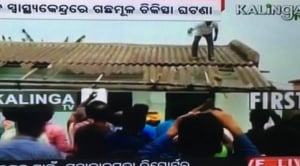 Kendrapara: Alleging that the Pharmacist is being made a scapegoat despite discharging his duties braving all odds, locals held a demonstration and ransacked the PHC in Babar village in Mahalakapada in Kendrapara district. Situation remains tense in the village.

Earlier, the CDMO at the directive from the top, had suspended Pharmacist Chaturbhuja Nayak for treating the patients under tree. The authorities drew flak for acting in haste to hide their failure instead of commending the Pharmacist who did not neglect and treated the patients under all circumstances.

Locals claimed that there is no proper infrastructure at Babar PHC and the MBBS Doctor as well as Ayush Doctor remained out of the village always. Only the Pharmacist steps in always to take care of patients and remains available 24×7, they say.

As per the villagers, the Pharmacist had no other option but to treat the patients under tree due to lack of adequate facilities and infrastructure at the PHC.