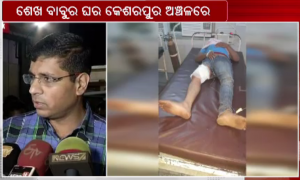 Babu was confronted by the police at Hadipatha area while he was on his way to the Silver City. All of a sudden he started firing at the police while the latter tried to nab him. The police personnel too retaliated in which Sheikh sustained bullet injury on the knee of his right leg.

“Acting on a tip-off, a special team waylaid to arrest two wanted criminals.  One of the criminals identified as Sheikh Babu of Cantonment police area was injured in the firing while another managed to escape from the spot,” said Cuttack DCP Sanjeev Arora while speaking to reporters.

Meanwhile, Babu, an aide of Mohammad Shakeel, has been admitted to the SCB Medical College and Hospital. As many as seven to eight cases are pending against Babu at various police stations of the city.