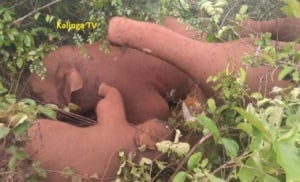 Dhenkanal: Carcasses of three elephants, including a baby pachyderm, were found in Borapada forest in Gobindapur panchayat in the district on Saturday.

Though the exact reason behind the death of the jumbos is yet to be known, given the circumstances, it is suspected that the big animals might have died after coming in contact with electric wire, which were seen hanging lower than the normal height.

Some locals first noticed the three elephants lying on the ground at the same place and were scared. After realizing that they were dead, they informed the forest officials about the matter.

It is assumed that the elephants, which were spotted in the area three days ago, might have died two days ago.

A team of forest officials, along with police personnel, rushed to the spot and started investigation.

According to the sources at the forest department, the carcasses of the pachyderms will be autopsied to ascertain the exact cause of the death of the animals.

Animal lovers in the sate said that it is high time for the state government to step up to protect the elephants from unnatural deaths, which is increasing.

Two days ago, a jumbo had died after coming in contact with an 11-KV electric wire in the Betnoti forest range of Mayurbhanj district.