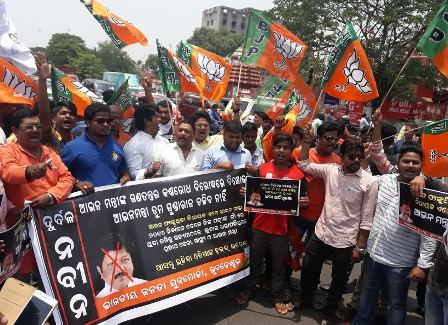 Protesting against disruption of a peaceful protest rally organised by it in Salepur  by BJD members, the Bhubaneswar unit of Bharatiya Janata Yuva Morcha (BJYM)) staged a demonstration near Ram Mandir Square on Monday.

Shouting slogans against the ruling party, they demanded action against the BJD workers who had attacked the saffron party workers yesterday.

The protesters also demanded the ouster of Health & Family Welfare Minister Pratap Jena alleging that he had furnished a false affidavit while filing his nomination for the 2014 Assembly election.

Supporters of the Minister allegedly snatched away the effigy of Jena and flags from the BJP men while they were protesting against the induction of new ministers embroiled in controversies.

CM flags off visit of 20 school students to ISRO