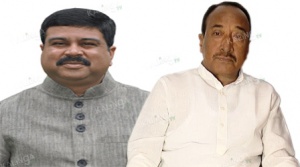 He has written a letter to Union Petroleum Minister Dharmendra Pradhan in this regard and urged him to provide employment to the people of Odisha in the Refinery.

“Paradip Refinery was the dream project of former Prime Minister Atal Bihari Vajpayee, which was accomplished and inaugurated by Prime Minister Narendra Modi in your presence. It was expected that the local people, mostly the supporters of the saffron party, would get employment there. But that did not happen,” said Mohapatra in his letter to Dharmendra.

He alleged that the IOCL has invested Rs 40,000 crores in the Refinery, but not even 40 locals have got job there.

People from other states have been engaged in the Refinery and other Central projects, while local people with the same eligibility are ignored, added the former Irrigation Minister of Odisha.

He also claimed that even the vehicles engaged in the transportation in the Refinery belong to other states.