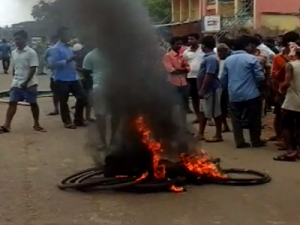 Protesting the vandalization of some shops by unidentified miscreants at the Bahugram village, locals staged a road blockade on Cuttack- Chandabali route by burning tyres on Tuesday.

Residents of Bahugram village and Biswanathpur village resorted to a group fighting over passing of lewd comments during a function on Sunday. Later, it was decided to resolve the issue by mutual understanding.

However, some miscreants damaged around seven shops in Bahugram market late on Monday night. Protesting the incident, the Bahugram villagers block the Cuttack-Chandabali route this morning.

Meanwhile, one platoon of police force have been deployed in the area to maintain law and order. Besides, the local administration has arrived on the spot.