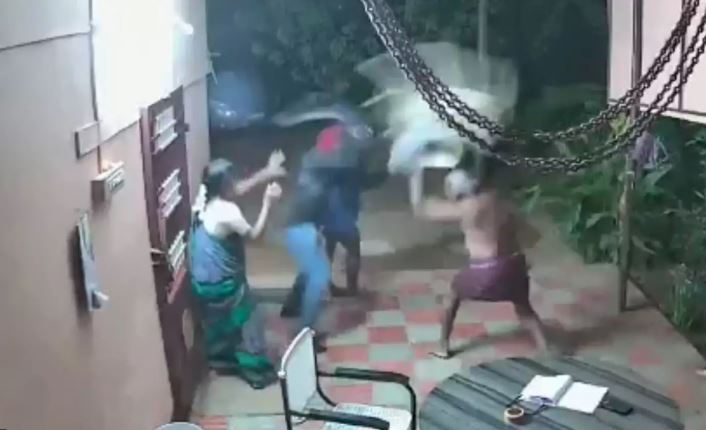 Tirunelveli: An elderly couple from Tamil Nadu is winning the internet for putting up a brave fight against two armed robbers, who entered the porch of their home last Sunday. A video showing the couple fighting the robbers with everything they could lay their hands on is viral and has won them praise.

Visuals show Shanmugavel, 70, sitting in the porch of his farmhouse in Tirunelveli district in southern Tamil Nadu on Sunday night when a masked machete-bearing man appears from behind and puts a piece of cloth around his neck to choke him. Caught off guard, he screams and tried to free himself as he kicks a second man.

Seconds later, his wife can be seen rushing out of the house.

65-year-old Senthamarai’s first instinct is to pick up a pair of slippers and throw them on the intruders. She later throws chairs and a stool as her husband too takes on them after kicking one of the men.

The woman was injured on her right arm. The gangsters managed to snatch her gold chain that weighed 33 gram, the police said.

#WATCH Tamil Nadu: An elderly couple fight off two armed robbers who barged into the entrance of their house & tried to strangle the man, in Tirunelveli. The incident took place on the night of August 11. (date and time mentioned on the CCTV footage is incorrect) pic.twitter.com/zsPwduW916

Investigators said the couple lived alone and the incident took place around 9 pm on Sunday. Though the police have registered a case, no arrests have been made yet.