Bhubaneswar: Scientists of the entire world are on the race to develop a vaccine for the deadly Covid-19 as the virus has already spread at a alarming speed with no cure in sight.

The scientists have claimed that the ‘milky blue blood’ of the horseshoe crab is a key element in the making of vaccine and drugs for novel coronavirus.

The Horseshoe Crab is a endangered species and have existed on earth  for more than 440 million years. Due to their ancient lineage, they are often referred to as “living fossils”.

One of the key reasons of the species’ longevity is their blue blood, so coloured because of its rich copper content.

The blue blood of these crabs are very expensive as they are very hard to catch and the extraction process of their blood is time consuming.

The blue blood costs approximately over Rs 11 lakhs per litre, giving it the name of ‘blue gold’.

For pharmaceutical companies, they work as an important resource for making medicines safe. Teams of lab workers capture the horseshoe crabs and take them to labs to harvest their cerulean blood, before returning them to the sea.

Karnataka Imposes Lockdown From May 10 – May 24 Due To…

The blue blood of the Horseshoe crabs contains a substance called limulus amebocyte lysate (LAL), which detects a contaminant called endotoxin, a type of bacterial toxin. Endotoxin is a very dangerous toxin for vaccine or drug development.

Frederik Bang and Jack Levin developed a test from Limulus polyphemus blood that detected the presence of endotoxin in 1960s, revealed the horseshoecrab.org.

This test, based on the fact that the blood of the horseshoe crab gels or clots when it comes in contact with endotoxin, was called the Limulus amebocyte lysate (LAL) test and was commercialized in the United States in the 1970s.

The horseshoe blood has been used for the development of vaccine, IV, drugs, and different medicines from the year 1970.

According to Atlantic States Marine Fisheries Commission, the blood harvest drained a third of the vital fluids from nearly 500,000 crabs in the U.S in 2018.

In the first week of July, a Switzerland Pharmaceutical company called Lonza is preparing to start the human trial of it’s covid vaccine.

For which the company is going to need a huge amount Limulus amebocyte lysate, which is harvested from the Horseshoe milky blue blood . 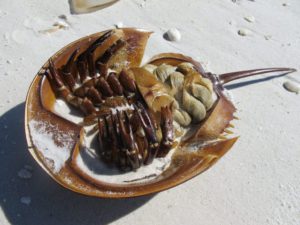