Nuakhai Bhet Ghat was celebrated in UAE with its grandeur and excitement. Hosted by the Nuakhai Paribar of Dubai the grand event was held at the Credence High School auditorium on 20th September 2019.

This sixth edition of Nuakhai Bhet Ghat saw a lineup of several cultural programs by local talents as well as troupes invited from Odisha, India.

As many as 80 local artists including kids, teens, and adults enthralled the 600 plus audience with their traditional Sambalpuri dance and song performances. The Rang Farua Group from Sambalpur, constituting 15 members kept the audience awestruck with their vibrant performance.

The program started with the lighting of lamps and offering “Nua Dhan” (new paddy) to the deity of Sambalpur, Maa Samaleswari. Shri Pujari praised the efforts of the host Odia community in organizing such an event here in UAE and keeping the great Indian traditions and culture alive even though staying outside India while inculcating the same in the new generations by involving the participation of kids in the program.

In his speech, Pujari said that he is amazed to see such a huge gathering of Odias and that this was the best Nuakhai Bhet Ghat he has ever seen. He congratulated the organizer for putting up such a beautiful show and expressed great satisfaction that our culture is being spread far and wide.

The excitement and interest built up to the event saw its culmination with an excellent line up of cultural programs by the local artists and huge support and involvement of the audience.

The first half was entirely dedicated to the local talents. The auditorium reverberated with the rich tunes of Sambalpuri beats and the entire atmosphere was electric which saw most of the audience dancing on the floor. 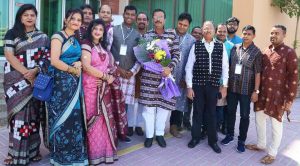 After lunch the external troupe entertained the audience and raised the excitement to a new level.

Sambalpur is known for its music, dance, and song as much as for the world-famous Sambalpuri dress. The rich culture and tradition of Sambalpur were quite visible as everyone adorned the traditional attire and the live performances created an aura of a festival giving a feeling of celebration at home in Odisha.

The community also felicitated renowned Sambalpuri singers Satrughan Luha and Pami for their invaluable contributions to Sambalpuri music and songs. They rendered some of their popular numbers to win heart of the audience.

The Head of Rang Farua Troupe Shri Durga Das mesmerized the audience with his soulful performances. The dance, song and music presented by the troupe were simply superb. 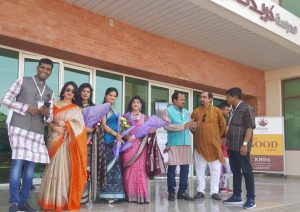 Traditional food was served and people greeted each other in the traditional way called “Bhetghat” (meet and greet) which was like the icing on the cake.

Later, all the local talents were presented with certificates and mementoes for their participation. A quiz contest in WhatsApp was running successfully for two weeks preceding the program wherein the whole community participated with great excitement and which serves as a great learning experience to know more about Western Odisha. Every day one question is put and one winner is selected. All the quiz winners were also felicitated on this occasion.

A day full of fun and flavor came to an end in the evening at around 7 pm after 9 hours of nonstop activities and it had a lasting impression in the minds of all the people present there. They definitely look forward to this celebration next year with lots more enthusiasm.

The organizers have assured that the tradition will continue and each year they will try to make it better and bigger.

Pant not succeeding at No.4, must bat down the order: VVS Laxman

Trump says “a lot” could be achieved before 3rd US-N.Korea summit