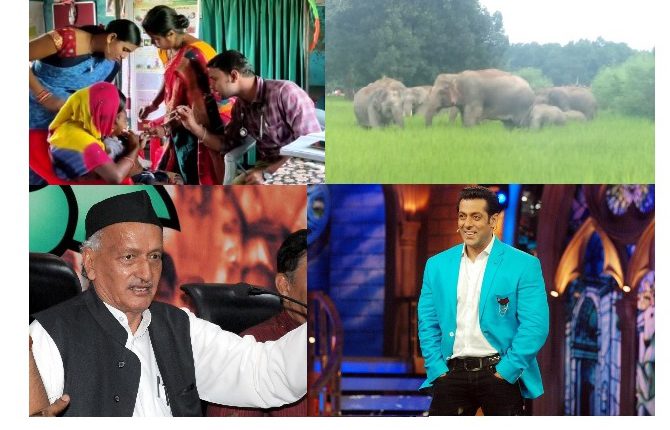 Here are the important happenings of November 10, 2019 in and around Odisha State, in the national front and in the international arena:

Sundergarh: Tension gripped Raja Dharanidhar High School in Bonaigarh in Sundergarh district after a student died during physical training by an NCC teacher and his parents alleged he was killed due to excess exercise.

Cuttack: Tension prevailed at SCB Medical College and Hospital in Cuttack on Sunday following the death of a minor boy under treatment and his family’s allegation of medical negligence for the same.

Malkangiri: Leaving residents in a state of panic in Tamanpalli village under Kalimela block of Malkangiri district at least six children have died of an unknown disease in past 15 days.

Baripada: With no respite in sight from the incidents of elephant incursion in the State, a herd of at least 22 wild elephants wreaked havoc in Sukruli under Karanjia Forest Range of Mayurbhanj district and caused large scale crop damage

Pipili: The decomposed body of a fourth class employee working with the Rural Development department was found on banks of Bhargavi river under Pipili police station limits on Saturday.

Cuttack: In an unfortunate incident a minor girl was electrocuted to death at Pandarabatia village under Mahanga police station limits today. The deceased has been identified Annapurna Pal (10).

75 Passengers Of Cruise Ship Rescued In Bay Of Bengal: Mamata

Kolkata: At least 75 passengers of a cruise ship in the Bay of Bengal were rescued by the West Bengal police while Severe Cyclone Bulbul raged on Saturday, Chief Minister Mamata Banerjee said.

New Delhi:While the ruling Aam Aadmi Party (AAP) was earlier confident that their work in the city in the areas of health and education would be the driving force in the capital’s upcoming assembly polls, with the Delhi air quality deteriorating sharply, however, the opposition BJP and the Congress hope to make election capital out of the pollution issue.

The Shiv Sena on Sunday advised the Bharatiya Janata Party (BJP) to grab the Governor’s offer to explore possibilities and willingness to form the government in Maharashtra.

Civil society and rights activists have demanded the immediate arrest of the killers of a Pakistani Hindu medical student who was found dead under mysterious circumstances in her hostel room in September, saying she was subjected to criminal assault.

A day after cyclone Bulbul wreaked havoc in the coastal areas of West Bengal, Prime Minister Narendra Modi on Sunday spoke to Chief Minister Mamata Banerjee to took stock of the situation.

Winter session of Odisha Assembly to begin from November 13, likely to be stormy