Bhubaneswar: Today, on July 12, 2019, the Bahuda Yatra of Lord Jagannath is being observed in Puri, the holy city in Odisha. Lord Jagannath had visited Gundicha temple, said to be His birthplace, along with His siblings Lord Balabhadra and Devi Subhadra on the Rath Yatra day, on July 4. And today is the return journey to Shree Mandira, the sibling deities’ permanent abode.

Akin to Rath Yatra, the main attraction of Bahuda Yatra also is the three chariots boarded by the three deities. Early in the morning, the rituals including mailam, tadapalagi, Abakash puja, and Surya puja were conducted. The three deities were then taken in a procession, called Pahandi, to be placed on their respective chariots. While Darpadalana is the chariot of Devi Subhadra, Lord Balabharadra’s chariot is called Taladhwaja and Lord Jagannath travels on the Nandighosha chariot.

The next remarkabale ritual was ‘Chherapanhara’ by the Gajapati. He was taken near the chariots placed near the Gundicha temple in a palanquin. Atop the chariots the Gajapati swept with a golden broom. He also sprayed sandal water on the chariots according to the ritual.

Later, first, the chariots of Lord Balabhara was pulled followed by the chariot of Devi Subhadra and then Lord Jagannath.

Odissi dancers presented dances on the Badadanda, right in front of the chariots. A few people went on chanting the name of God in groups. It is called Sankirtan. Some other devotees tried to amuse God and the audience disguised as the characters of mythology.

Here are some amazing photos from Bahuda Yatra 2019 in Puri, Odisha: 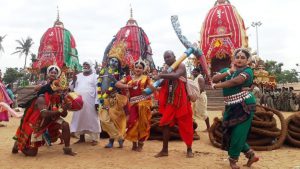 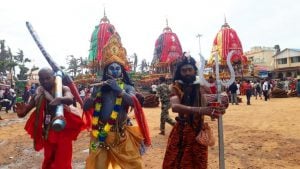 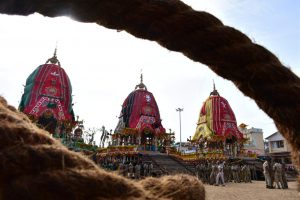 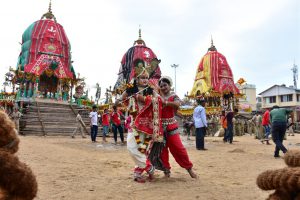 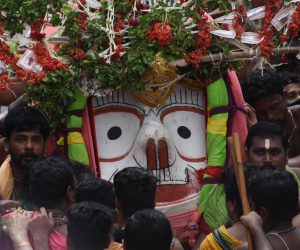 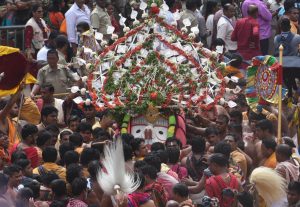 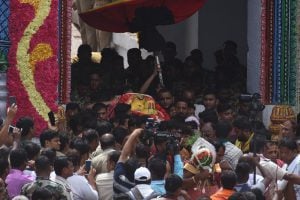 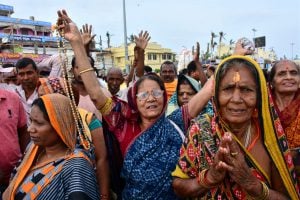