Diwali across the country, celebrate the festival of lights 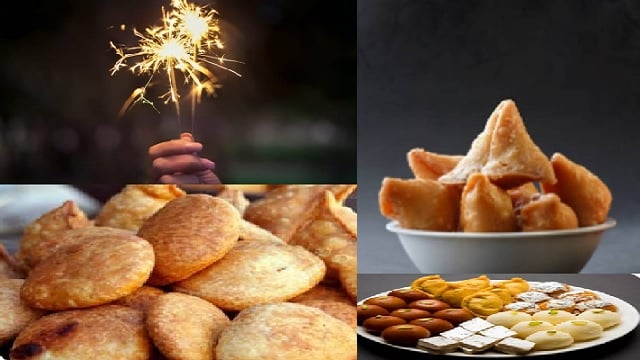 New Delhi: Diwali, known as “the festival of lights” is celebrated with grandeur all over India. However, there are regional differences in the celebrations and rituals. In north India, this festival arrives at Dussehra.

On Diwali night, which is regarded as lucky, people also gamble in Himachal Pradesh, Delhi, and Punjab. Sikhs do not traditionally celebrate Diwali in Punjab, but they participate in the festivities and light their homes with candles and diyas. On Diwali night, the gurdwaras are also illuminated. Houses are adorned with candles, lights, diyas, bandhanwars, and rangolis in Delhi, UP, and other nearby areas. At night, Laxmi Puja is performed. There is a custom in some homes where a silver coin is placed in a milk tumbler before being sprinkled throughout the house. The celebrations include activities like gift-exchanging, house cleaning, gambling, redecorating, painting, and decorating the home.

In Eastern India, the required rituals continue to be the lighting of lamps, candles, and diyas as well as crackers.

Laxmi Puja is observed in West Bengal six days after Durga Puja. Kali Puja is observed on Diwali. On the eve of Diwali, Goddess Kali is worshipped late into the night. Kali Puja pandals can be found everywhere. Other customs stay the same. The celebration also includes the creation of rangoli patterns. The night of Diwali is also known as Pitripurush, the night of the ancestors, and diyas are lit on tall poles to help the departed on their journey to heaven. This custom is still practised in rural Bengal today.

Some of the traditional Diwali dishes across Indian states:

Anarsa (Maharashtra): Anarsa is a dessert made of rice flour and jaggery and is enjoyed as Diwali snacks.

Babroo (Himachal Pradesh): It’s an irresistible treat from the land of Gods and is made of all-purpose flour, sugar and yeast. It might look like gulgule, but has a different taste and can stand out very easily.

How to get back your fitness post Diwali binge eating

Chhodo Shaak (West Bengal): As compared to the tradition of making sweets on the occasion of Diwali across India, West Bengal prepares a savoury dish called Chhodo Shaak, which is actually made using 14-green leafy veggies.

Gavvalu (Andhra Pradesh): It’s a sweet dish made of all-purpose flour, ghee, jaggery and water. The dough is made and then shaped just like gnocchi pasta, and then dipped into sugar syrup.

Mawa Kachori (Rajasthan): This exotic delicacy of Jodhpur (Rajasthan) is a scrumptious treat that has a sweet crust and a filling of mawa/khoya and mixed dry fruits. This kachori is dipped in a sugar syrup and will give you a mind-blowing experience.

Khaja (Bihar): The name of this dish literally means to just grab and munch on it. It’s also made of a dough of all-purpose flour, which has several layers in it and then deep fried. It is further soaked in sugar syrup and is enjoyed on Diwali.

Diwali is a four-day celebration in Maharashtra. The first day, Vasubaras, is honoured by having a cow and calf Aarti performed. This represents the affection a mother has for her child. The following day is Dhanteras, also known as Dhanatrayodashi, which is observed similarly to other cultures. The third day, Narakchaturdashi, is when people visit temples and take scented oil baths early in the morning. Following this, the Maharashtrians indulge in a special Diwali meal that includes scrumptious desserts like “karanji” and “ladoo” as well as spicy foods like “chakli” and “sev.” Faral is the name of this festival. Lakshmi Puja is performed on the fourth day of Diwali, which is the main festival day. Goddess Lakshmi, wealth-enhancing objects like money, and jewellery are worshipped.

The Tamil month of aipasi, also known as “naraka chaturdasi” thithi, is when Diwali is observed. The amavasai day comes before this one. Naraka Chaturdashi is the main day of the Diwali celebrations in south India. The oven is cleaned the day before the main day and then lime is spread all over it. On the water-filled oven, which is used for the oil bath on the main day, religious symbols are drawn.

Homeowners clean their buildings and adorn them with kolam patterns, which are comparable to rangolis in North India. The celebrations include lighting firecrackers and donning new clothing. For use on Diwali, a plate is kept with crackers and brand-new clothing. Diwali or Naraka Chaturdashi celebrations start with an oil bath before dawn on the morning of the holiday. After that, candy is consumed and fresh clothing is put on.

People take an oil bath on the first day, which is Ashwija Krishna Chaturdashi. It is believed that after killing Narakasura, Lord Krishna took the oil bath to wash the blood stains off his body. On the third day of Diwali, known as Bali Padyami, women decorate their homes with vibrant rangolis and construct forts out of cow dung. On this day, people commemorate various King Bali-related tales. These are the two main Diwali days in Karnataka.

1 dead in road accident in Mayurbhanj of Odisha