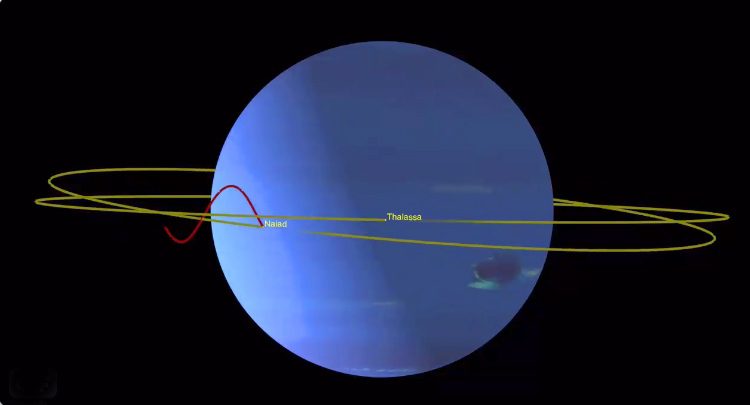 New Delhi: A celestial dance of two moons of Neptune to avoid collision with each other has spurred the interest of Twitter users, who are clearly fascinated by the astronomical phenomenon.

Twitter users used hashtags like Astronomy, Neptune, Space and posted animated movement of the Neptune’s inner moons — Naiad and Thalassa — and how their odd orbits enabled them to avoid collision as they moved around the planet. It was dubbed “dance of avoidance”.

“Here’s how two Neptune moons dance around each other”, wrote one user along with an animated clipping of the phenomenon revealed in a newly published research study by a NASA team.

Also read: Thousands Of Disney+ Accounts Up For Sale On Dark Web

Another wrote: “#NASA has detected weird orbital movement from two of Neptune’s moons”.

The orbits of tiny Naiad and Thalassa are only 1,850 km apart, a miniscule distance in space.

On Celestial dance some other Twitter users also posted interesting nuggets of information on the comparative sizes of different planets in our solar system as well as the time they take to complete their respective orbits around the sun.

One user had a humorous take on the astronomical discovery. Posting a picture of the eight planets in the solar system, he wrote: “The only important lesson I took from #Astronomy with a picture in which it was depicted that tacos could be eaten on planet Earth and no other in our solar system.”

Yogi orders probe in fire in UP home guard office