3 Killed, 27 Injured After Joyride Comes Crashing Down In Ahmedabad 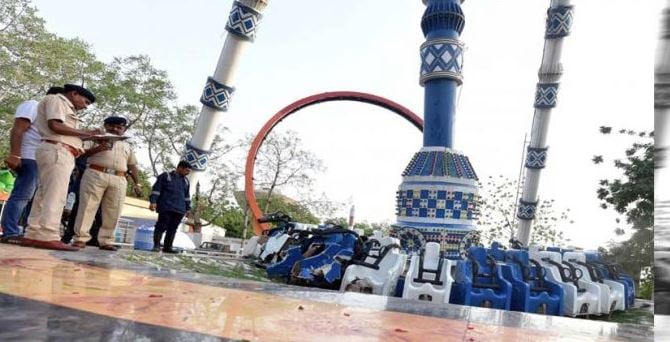 Ahmedabad: At least three people were killed and 26 others injured after a joyride at an adventure park in Ahmedabad’s Kankaria collapsed on Sunday. While the reason behind the mishap is yet to be known, the injured were rushed to the hospital nearby. At least a dozen of them are critical, reports said.

Ahmedabad Municipal Corporation Commissioner Vijay Nehra told journalists that a probe is being conducted by Forensic Science Laboratory (FSL) team to ascertain the cause.

Joyride broke down at kankaria!!
3 died & more than 25 people are injured.
All joyrides are suspended for checking till next order for safety reasons.#kankariya #gujarat pic.twitter.com/zbdz7Zpe2u

Ahmedabad: 2 people died&26 injured after a joyride at an adventure park in Kankaria area broke this afternoon. Vijay Nehra,Commissioner, Municipal Corporation says,”Police along with the FSL team is investigating the matter.Proper treatment is being given to injured.” #Gujarat pic.twitter.com/YmV1qS9w2F

“Police along with the Forensic Science Laboratory (FSL) team is investigating the matter. Proper treatment is being given to injured,” Commissioner of Municipal Corporation Vijay Nehra was quoted as saying by news agency ANI.

As per report, the incident occurred in the evening when a pendulum ride malfunctioned and crashed onto the ground. MF Dastoor, chief fire officer of Ahmedabad Municipal Corporation said that a pipe in the main shaft of the ride was responsible for the mishap. Dastoor said that the FSL probe would ascertain how the pipe broke.