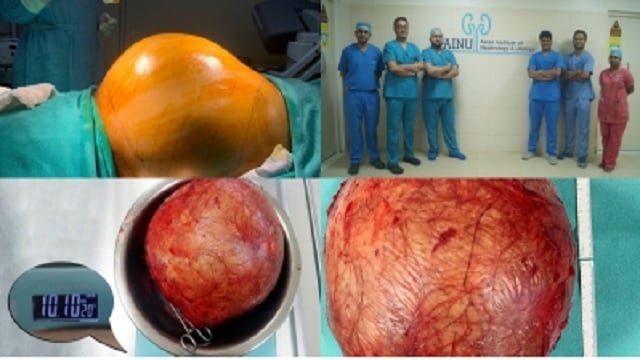 Hyderabad: Doctors at the Asian Institute of Nephrology and Urology (AINU) in Hyderabad have successfully removed a football-sized kidney tumour weighing 10 kg to save the life of a 53-year-old man.

This successful surgery is the first-ever such feat registered in the Telugu States and second instance in the country, the hospital said on Thursday.

According to doctors, the patient, a resident of Kadapa, was referred to AINU with abdominal swelling.

On examination, doctors found the presence of a large abdominal mass lesion. Imaging revealed that tumour was arising from left kidney.

The Magic of Yoga for working women

Warning: Vitamin B3 supplements increase the risk of cancer…

Everyday habits that affect your eyesight

The mass was so large that it occupied two-thirds of the abdominal cavity, and it even displaced intestines into the right lower quadrant.

“Considering the size of the tumour, we ruled out robotic procedure, and instead opted for an open surgery. With great efforts the tumour could be removed successfully. Post-surgery, we discovered the tumour was extremely large, in the size of a football. Microscopic examination confirmed that the tumor was a cancerous growth (Renal Cell Carcinoma),” explained Dr Mallikarjuna.

“There was swelling in the abdomen, surprisingly the patient did not notice it much or may have ignored it despite the pain. Our team removed the cancer-affected left kidney. Microscopic surgical margins were clear implying complete removal of the tumour. Fortunately, it was found that the patient did not need any additional therapy as the tumour had not spread to any other organs. We have cautioned him against ignoring follow up. That will help in regular monitoring,” added Dr. Rajesh K. Reddy and Dr. Taif Bendigeri.

According to Dr. Purnachandra Reddy, Executive Director and Chief Consultant Urologist, AINU, urological cancers are rising all over the world, adding that this needs to be taken seriously.

AINU routinely performs surgeries for urological malignancies. It is well equipped with Surgical Robot and laparoscopy which facilitate surgery through key-holes.

Unlike the present case scenario, if a patient gets diagnosed in early stage, partial nephrectomy (Removal of tumor without sacrificing healthy part of the kidney) can be performed by key-hole surgery, Dr Reddy added.

Sun to transit in Scorpio on November 16: know how it will affect your zodiac sign