With hurdles on way, Anu Raghavan sprints to glory 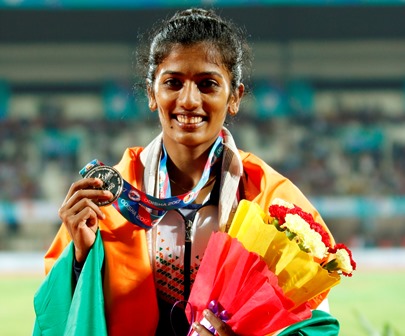 Bhubaneswar: For Anu Raghavan, the medal that hangs around her neck is not just a piece of silver. It symbolises the hard work and patience of the athlete, who is almost making a re-entry into the sporting arena with the 22nd Asian Athletics Championships.

Playing her first ever international in almost two years, she was not only competing in the track with fellow participants in 400 metres hurdles, but also fighting a mental war against the federation and all those who had questioned her performance.

Last year, Anu failed to make a cut in the relay team despite having better timing. She had filed a case which is still ongoing and had almost decided to quit sports. But thanks to the support of her family, she took up individual event – 400 metres and has now clinched a silver, her first ever at Kalinga Stadium.

“It is difficult to express the feeling. There was a lot of tension. It was my first international after two years and I didn’t even know my competitors well. But I still got a silver and have proved myself,” Anu said.

“It has been a difficult journey and my parents and coach have supported me a lot. I wanted to quit sports but I stayed only on their insistence.”

Crediting her coach PB Jaikumar as the reason of her success, she said she wants to continue coaching with him to better her performance.

“I didn’t show improvement in national camp. But training under Jaikumar sir, I have improved a lot and now have also won a silver medal. I want to continue training under him,” she said.

However, she feels the medal is just the beginning and she has a long way to go. “There are important championships like Asian Games coming up. I have to keep doing better job.”