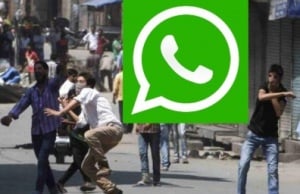 Gone are the days when WhatsApp groups were being used to share information, pass on photos and videos of family members, friends as well as relatives plus news & views. The hottest mode of communication platform has now become a tool for anti-social elements, rumor mongers and trouble makers to spread lies, hatred and encourage vandalism.

The Jammu & Kashmir Police yesterday revealed that nearly 300 WhatsApp groups with around 250 each, were used in the Kashmir Valley to disrupt anti-terror operations by security forces and mobilise the stone pelters. After the Govt swung into action, more than 90% of these groups have been shut down in the past three weeks.

The Cops identified the Groups and Group Administrators and counselled them. That yielded good results and led to the closure of the groups. No force was used, the cops say.

Of late, we have seen such instances in Delhi, Uttar Pradesh, Odisha and many other parts of the country where WhatsApp groups were used to foment trouble. It’s high time government stop remaining a mute spectator to this danger and act fast to prevent misuse of social media platforms further.