Kolkata: A transgender couple from West Bengal tied the knot at a social ceremony in Kolkata on Monday- the first ‘rainbow wedding’ in the ‘City of Joy.’

Tista Das and Dipan Chakraborty had announced their wedding in April this year.

Tista, 38, is a popular face of the transgender community in Kolkata, having worked as an actor in films and TV. She met Dipan, 40, from Assam’s Lumding a few years back and the two struck a chord instantly.

In April, on the occasion of National Transgender Day of Visibility, the couple announced their decision to tie the knot in what is now known as Kolkata’s first ‘rainbow wedding’. 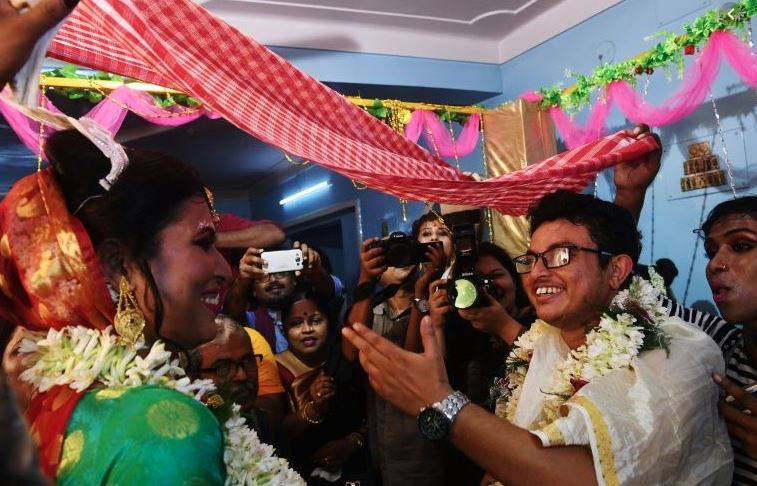 “We are all ecstatic, not just me but each and everyone who has supported us. It has indeed been a tough ride, facing stiff social stigma. Therefore, this day has special significance in all our lives. And what adds to it is the fact that we could choose our life partner,” said Das, Bengal’s first transgender woman with a voter ID card.

“Being social outcasts we only hope this day sends out a message for people to realise that we are humans too, we do have feelings as well and we too have possibilities in life. I can only hope mindsets change and people come out of fear,” Dipan said.

While Dipan’s family stayed away from the social event, Tista’s mother has been extremely supportive. Born as Sushanto Das, a man from a Kolkata suburb, Tista gave herself a new identity as a transwoman 15 years ago. She underwent sex reassignment surgery (SRS) in 2004 after being diagnosed with gender dysphoria in her childhood.

Since then, Tista has been a vocal champion of the transsexual rights making numerous public appearances challenging gender stereotypes and prejudices.

Also Read: Photoshoot Of Hindu-Muslim, Indian-Pakistani Same-Sex Couple Is Winning Hearts All Over