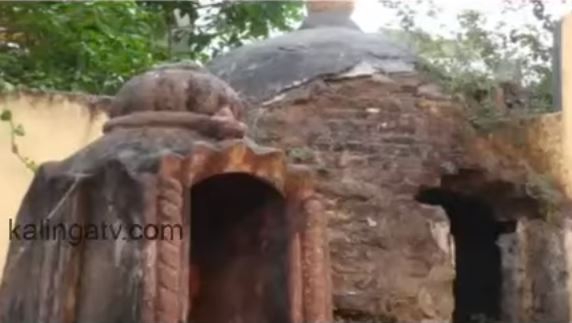 Puri: Santha Balaram Das, the eldest of the Panchasakha was a great devotee of Lord Jagannath. His work field was Shreekshetra, or today’s Puri in Odisha. However, his sadhnapitha is in a dilapidated condition. The Baliratha by Bhakta Balaram Das, which was said to be made in the Chakratirtha area of Puri, is not found. It has been limited and found only in texts.

Panchasakha, the group of legendary five writers, were the propagators of Bauri Vaishnavism.  Out of the five friends or sakhas, Saint Balaram Das was the eldest. He had taken birth at Chandrapur of Jajpur. He had spent most of his lifetime in Puri and during his last days he was in the Samangara area of Puri where he also was buried after his death. 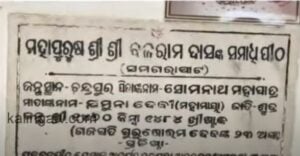 From this line it is known that back then bhois were holding burning torches. Besides, he has written many things about Bauri community in Siddhanta Darpana.

Santha Balaram Das had raised voice over caste system. It had felt in the narration in the famous text ‘Laxmi Purana’. It became a subject of discussion. In Laxmipurana it has been written that Goddess Laxmi visited house of Shreeya Chandaluni, a low caste woman. This episode had earned much ire of the Bramhins. It did not go well with them. Accordingly, once during Rath Yatra, the world famous Chariot Festival of Lord Jagannath in Puri, Balaram Das was insulted by the Pandas when he was trying to get darshan of Lord Jagannath and siblings aboard the chariots.

As he was insulted Balaram Das came back and went to the seashore where he made three chariots with sand and worshipped the Gods in those sand chariots. Lord Jagannath, who is also known as ‘Bhabara Thakura’ (God who can know divine feel of devotees), left Nandighosha and incarnated on the sand chariot. These sand chariots are known as ‘Baliratha’.

The Ratha Yatra was affected and the chariots did not move despite much effort. In the night King Gajapati dreamt about Baliratha. In the morning, the Gajapati King went to Balaram Das who was then worshipping Lord Jagannath on the Baliratha. The king apologized to him and Ratha Yatra was observed. Researchers of Jagannath culture have narrated it.

With time the cave of Balaram Das and the Baliratha on which Lord Jagannath himself had incarnated, is not found. The sadhanapitha of Balaram Das is not seen.

It has been complained that land mafias even did not spare the Sadhanasthala and mutt of Balaram Das that was associated with Lord Jagannath culture. They have allegedly occupied the said land in the Chakratirtha area of Puri. 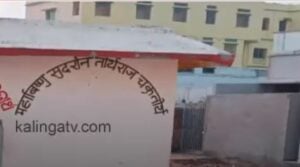 Earlier, Balaram Das Sadhanapitha was in Chakratirtha area spread over approximately 9 acre lands. However, the same has been occupied by mafias now. Even, there is no lighting facility near the chakra Narayan temple. Hence, now the place has become heaven for drug edicts and criminals. The locals and intellectuals have demanded for the development of this area.

Earlier, the Panchasakha, which constituted of Santha Balaram Das, Atibadi Jagannath Das, Achyutananda Das, Yasobanta Das and Sishu Ananta Das, had highly inspired erstwhile Odishan life and culture. They had propagated Vaishnavism in the 15th Century. It has been demanded that development of Balaram Das should be taken up so that the next generation can know about the great saint and his works as well as the then culture of Utkal.