Assigned by Odisha Sangeet Natak Akademi for propagation of Sakhi Nacha, Ganjam kids have been seen learning this dance form from their mentor to safeguard it from the verge of extinction 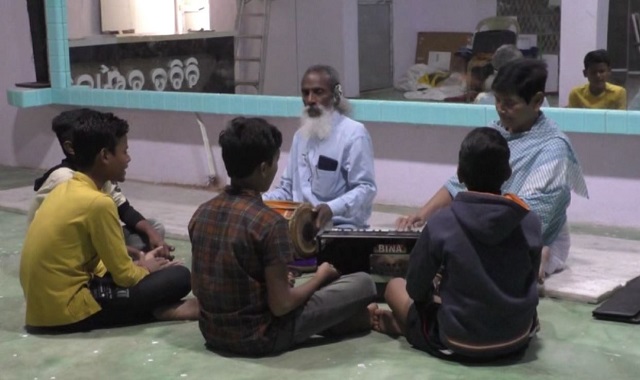 Digapahandi: In an effort to restore an age old and popular dance form of Odisha called Sakhi Nacha, kids at Bichitra Barnali Natya Sansad are these days practising the song and dances. They have seen learning the art from their mentor. While this dance form is on the verge of extinction Odisha Sangeet Natak Akademi has come forward to restore. And the assignment has been given to the Natya Sansad of Ganjam district.

Sakhi Nacha is a tough dance form, mainly enacted by kids. This is said to be a folk dance with classical connotations that boys and girls perform.

Though there is no solid evidence about origin of Sakhi Nacha, some historians claim that Sakhi Nata is much older. Many of the steps are synonymous to the classical Odissi dance. And due to the similarity in basic movements with the classical dance form it is believed that that Odissi dance has its origin in Sakhi Nacha.

Many claim Sakhi Nacha or Sakhi Nata is an ancient dance form which was prevalent from time immemorial. However, the performances are seen in Odisha. In this form the actor/ dancer needs to sing, dance and perform simultaneously on the stage while an live orchestra provides them support from the background with live music.

It is said long ago this dance form was started from Bhanjanagar area of Ganjam and later spread to other villages of the district.

The lyrics of the songs performed in Sakhi Nacha are based on the romantic anecdotes of the divine love between Hindu Gods and Goddesses including Radha and Krishna.

Kids and teenagers play this dance. Even for the women characters, baby boys get attired as women and perform. They enact the characters of sakhi (friend) of Goddess Radha and so it is called Sakhi Nacha.

With the advent of modern age, this dance is now on the verge of extinction. Even recently it was felt that there is scarcity of mentors to teach this dance. Hence, from last August Odisha Sangeet Natak Akademi came up with a ‘Dikshanta’ programme to keep it up. This task has been given to the Bichitra Barnali Natya Sansad of Digapahandi area in Ganjam district. The kids who are learning here have said that they are happy about it as it has bestowed them a special identity. These artists have so far performed in Ganjam, Bhubaneswar and Delhi.