Remembering the Iron Man on his 68th death anniversary

Vallabhbhai Patel was one of the top leaders of Indian Natinal Congress during the struggle of India’a independence. He was India’s first Deputy Prime Minister. He is better known as ‘Sardar Patel’

Patel was born October 31, 1875, Nadiad, Gujarat, India—died December 15, 1950, Bombay [now Mumbai]). He was an Indian barrister and statesman, one of the leaders of the Indian National Congress during the struggle for Indian independence. During the first three years of Indian independence after 1947, he served as deputy prime minister, minister of home affairs, minister of information, and minister of states.

His family was an agriculturist one of the Lewa Patidar Community, and could in terms of economic status be described as lower middle-class. It was poor and had no tradition of education.

Reared in an atmosphere of traditional Hinduism, he attended primary school at Karamasad and high school at Petlad but was mainly self-taught. Patel married at the age of 16, matriculated at 22, and passed the district pleader’s examination, which enabled him to practice law. In 1900 he set up an independent office of district pleader in Godhra, and two years later he moved to Borsad.

As a lawyer, Patel distinguished himself in presenting an unassailable case in a precise manner and in challenging police witnesses and British judges. In 1908 Patel lost his wife, who had borne him a son and daughter, and thereafter remained a widower. Determined to enhance his career in the legal profession, Patel travelled to London in August 1910 to study at the Middle Temple. There he studied diligently and passed the final examinations with high honours.

Even as a young boy Vallabhbhai displayed qualities of organization and leadership that marked him out for his future role. Once as a sixth-form boy he organized a successful strike of his classmates that lasted for three days to teach a lesson to one of the teachers who was unduly fond of the rod.

Vallabhbhai must have inherited these attributes from his father who, it is said, had fought in the Mutiny under the Rani of Jhansi and was subsequently taken prisoner by Malhar Rao Holkar.

Vallabhbhai was a mature young man of twenty-two when he matriculated. Owing to the financial conditions in his family, he decided that he would practise for a few years and then he could plan to go to London.

But an attack of plague put a minor roadblock to his dreams. He struggled for a while. By 1902, Vallabhbhai became quite popular here as a defence lawyer. Vallabhbhai now wanted to go to England and qualify as a Barrister. From his practice, he had earned enough for his expenses there but owing to certain circumstances he was not able to make the trip at once.

He finally sailed for England in 1910 and joined the Middle Temple. Here he worked so hard and conscientiously that he topped in Roman Law, securing a prize, and was called to the Bar at the end of two years instead of the usual period of three years.

Returning to India in February 1913, he settled in Ahmadabad, rising rapidly to become the leading barrister in criminal law at the Ahmadabad bar. Reserved and courteous, he was noted for his superior mannerisms, his smart, English-style clothes, and his championship in the bridge at Ahmadabad’s fashionable Gujarat Club. He was, until 1917, indifferent to Indian political activities.

In 1917 Patel found the course of his life changed after having been influenced by Mohandas K. Gandhi. Patel adhered to Gandhi’s satyagraha (policy of nonviolence) insofar as it furthered the Indian struggle against the British. He didn’t quite follow all of Gandhi’s principles. But he did quit the fancy life and Gujrat Club. He started wearing khadi and following the simple Indian ways

From 1917 to 1924 Patel served as the first Indian municipal commissioner of Ahmadabad and was its elected municipal president from 1924 to 1928. Patel first made his mark in 1918, when he planned mass campaigns of peasants, farmers, and landowners of Kaira, Gujarat, against the decision of the Bombay government to collect the full annual revenue taxes despite crop failures caused by heavy rains.

In 1928 Patel successfully led the landowners of Bardoli in their resistance against increased taxes. His efficient leadership of the Bardoli campaign earned him the title Sardar (“leader”).

Just like Motilal Nehru and Gandhi, he believed in India having dominion status under the British rule. His views clashed with Subash Chandra Bose and Jawahar Lal Nehru.

About this time the political situation in the country was approaching a crisis.

The boycott of the Simon Commission was followed by the launching of the famous Salt Satyagraha by Gandhiji. Vallabhbhai Patel, though he had not committed any breach of the Salt Law, was the first of the national leaders to be arrested. He was in fact arrested on March 7, 1930 – some days before Gandhiji set out on the march to Dandi. He was released in June.

In March 1931 Vallabhbhai presided over the 46th session of the Indian National Congress which was called upon to ratify the Gandhi-Irwin Pact, which had just then been concluded.

Vallabbhai actively supported the Civil Disobedience Movement. He was put in jail multiple times because of his strong views.

Then the All India Congress Committee passed the famous Quit India resolution in Bombay on August 8, 1942, and Vallabhbhai, along with the other members of the Working Committee, was arrested on August 9, 1942, and detained in the Ahmednagar Fort while Gandhiji, Kasturba and Mahadev Desai were detained in the Aga Khan’s Palace.

When India attained Independence he became the Deputy Prime Minister and was responsible for the Home, States and the Information and Broadcasting portfolios.

It was in this capacity that he was called upon to tackle the most intricate and baffling problem of the States’ integration into the Union of India. And it is here that his tact, his powers of persuasion and his statesmanship came into full play.

As Minister of Home Affairs, he presided over efforts to bring back order and peace to a country ravaged by communal strife unprecedented in its history. He accomplished this task with the ruthless efficiency of a great administrator.

He sorted out the problems of partition, restored law and order and dealt with the rehabilitation of thousands of refugees with great courage and foresight. He reorganised our Services which had become depleted with the departure of the British and formed a new Indian Administrative Service, to provide a stable administrative base to our new democracy. 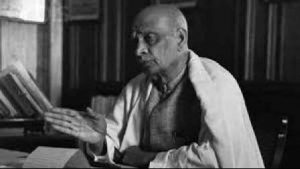 While Gandhiji gave to the Congress a programme for a broad-based action, it was Vallabhbhai who built up the Party machinery so as to carry out that programme.

His grip over the Party organisation was complete. Vallabhbhai Patel was thus one of the chief architects and guardians of India’s freedom and his contribution towards consolidating the freedom of the country remains unrivalled.

He died on December 15, 1950, leaving behind a son, Dahyabhai Patel, and a daughter, Maniben Patel. The Statue of Unity, unveiled by PM Modi, stands on the banks of the Narmada river. It is 182m high, making it the tallest in the world. The statue was built at a cost of Rs 2,989 crore.