The degradation of groundwater quality can be attributed to the effect of saline water ingress into the coastal aquifers here. Jagatsinghpur: The slum dwellers are worried over the declining ground water level in the port town Paradip in Jagatsinghpur district of Odisha because they are the most affected victims.

The degradation of groundwater quality can be attributed to the effect of saline water ingress into the coastal aquifers here.

Environmental change as well as unlimited use of water by the industries has suspected to have brought this menace. The problem has been witnessed mainly in the areas close to sea shore. When excavated, at some places saline water is oozing out while at some other places iron mixed water is oozing out from the ground. And this has become the main concern for the residents of Paradeep. 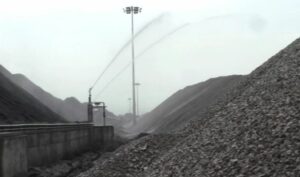 About 40 thousand slum dwellers of 12 wards in Paradeep have been affected by this issue of declining ground water level. To every one’s surprise, the places where fresh ground water was available for the last 40 years, now either saline water or iron mixed water is oozing out from these places during boring of well.

Paradeep is the industrial township of Jagatsingh district. Only four years ago, the ground water was available at 280 meters depth while now the same has declined and is available at 300 meter deep in the ground.

More than 10 thousand people are living in the wards 17th, 18th and 19th of Sandhakuda. These people depend upon wells, bore wells and ponds because there is no arrangement of supply water. However, due to lack of maintenance bore wells are out of order at many places. At some bore wells iron mixed water is oozing out which is not fit for drinking. This water can be used only for washing.

The wells have been dumped at many places. The water of pond has been polluted after drain water have entered. Water mafias have dug deep bore wells and selling water in jars after filtering. They are earning good from this. Besides, plenty use of water by the industries of the area have mostly contributed to the issue. 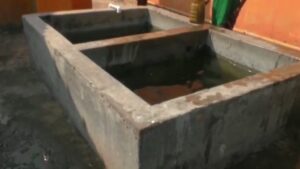 Special water houses were built and the slum dwellers were being supplied with fresh drinking water from these points. More than Rs 20 lakh was invested in each of these places. Yet, now this water is not suitable for drinking because either salty or iron mixed water is oozing out from these bore wells. And in some other places the machines have gone out of order due to lack of maintenance.

Asked about the issue the Asst Engineer of the Water department has denied issuing any statement. Intellectuals, social workers and environmentalists have said that since the NRL Company is feeling the low lying lands by doing dozing from the sea, the ground water in many areas have changed from fresh water to saline water.

Now, Paradeep Port has turned up to solve the water scarcity issue. The Paradeep Port chairman has said that daily about 16 million litre of fresh water will be supplied through water purification of the sea water using modern technology because there is no sufficient water in the Taladanda canal. Besides, rain water harvesting will also be done. A budge of RS 52 core has been estimated for this. Soon, a tender notice will be laid for this work.