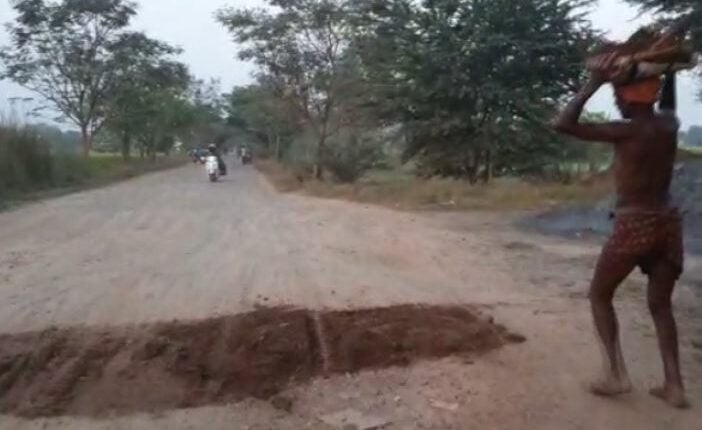 A common man has taken initiative towards road construction in Begunia area in Khordha district of Odisha. He waited for others to construct the road. Yet, as for long neither the government nor any other body come forward, he took initiative. He did his share of physical labour and put soil on the road to make it plain. Here is the inspiring story. Our Begunia reporter Durga Prasad Das reports.

Meet Rabindra Behera, also known as Nalu from Gangpur village. He takes the cows to the green fields daily so that they can graze grasses. He moves daily on the Khordha-Banki main road near Simor. He observed that bicycle riders, bikers and motorists are facing problem while travelling on the road due to the pot holes. 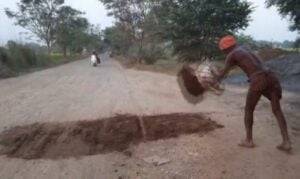 The next day he brought a spade and a container from home. As he reached his destination he left the cows to graze at their own in the meadows and started work. He used spade to dig the land and collected soil and took it on his shoulder using the container to put on the pot holes of the road. The work continued for that day. Interestingly, this noble work by the common man went on regularly.

A couple of days back our reporter was going on this route when he witnessed Rabindra putting soil on the road. Initially he thought that the man has been engaged by a contractor, but soon he came to know that this was voluntary work that was being provided by the common man.

With this noble effort by Rabindra, the said road though have not got a completely new look, but has been properly shaped. It has resulted in lessening of many small accidents on this road.

One killed, one critical after bike hits breakdown truck in Deogarh