No money for chemo; 3-yr old Priyanshu stares at death 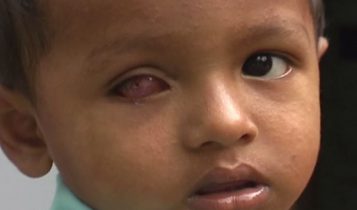 Bhanjanagar:  Cute little Priyanshu of Harihar Sahi under Gangpur police limits of Ganjam district was perfectly normal and had no physical ailments at birth. But a year after birth, he was diagnosed first with tumor and then cancer. At the tender age of three, he is now fighting for life as his poor parents have no money for the much needed chemotherapy treatment.

“He was fine till he was one-year-old. Later, his right eye began getting smaller. We did not pay much attention to it. But three months ago, we noticed a mustard-seed size black mark on his eye. We took him to the Bhanjanagar hospital after realizing that it was getting bigger by the day. The doctor administered him a drop and asked us to get his eyes scanned,” said Priyanshu’s mother Sujata Sahu.

Sujata, along with her husband Bhagaban Sahu, a farmer, arranged Rs 5000 with great difficulty and took Priyanshu to MKCG Medical College and Hospital in Berhampur, which they had never seen.

To their dismay, the poor couple was told by the MKCG doctors that the child will have to undergo an operation.

“One of the sisters informed me that the child may lose his eyesight after the operation. When I pleaded with her to do something so that he may retain his sight even after surgery, she said we will not get quality treatment here as MKCG hospital is a government-run hospital. She advised us to take my son to L V Prasad Eye Institute in Bhubaneswar,” said Sujata.

The couple, who had never gone beyond their village, took some loans from neighbours and relatives and admitted the three-year-old boy at L V Prasad Eye Institute in Bhubaneswar with a lot of hope and expectations. But their hopes were shattered when an ENT specialist at the Institute informed them that there was a tumor in the child’s eye lens and there was a risk post operation. He said once operated upon, Priyanshu’s chances of retaining his eyesight were very slim. But with his parents’ consent, the operation was conducted, following which the minor lost his eyesight for forever.

Priyanshu’s parents trembled with fear and were left speechless by the report of another test done some days later, which revealed that the tumor had developed into cancer and was gradually moving towards the brain. The doctor gave the minor one chemo out of the full course of six and asked Bhagaban and his wife to give the other five chemo once every three weeks.

Though it is already time for Priyanshu to take the second chemo, he is yet to go for it due to the financial constraints of his parents.

“The medical expenses are beyond our capacity to meet. We did whatever we could. We know very well that our son is very critical, but cannot do anything to save him.  Therefore we request the state government and the district administration to help us with financial assistance for Priyanshu’s treatment,” said Bhagaban, who has the burden of running his six-member family by cultivating land.

If you want to help save Priyanshu, here is the address