Meet the person behind christening of Ólly, the mascot for Asian Athletics meet 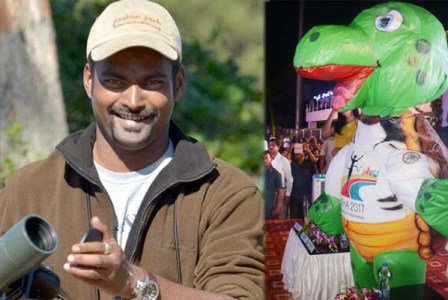 When Chief Minister Naveen Patnaik unveiled the mascot for the 22nd Asian Athletics Championship in Kalinga Stadium recently, the one thing that caught everyone’s fancy was the name of the mascot, ‘Olly.’

While the logo of the Championships sports an athlete crossing the finishing line with tourist attractions of Odisha as the backdrop, the mascot resembles the endangered Olive Ridley sea turtle. The name Olly is essentially a shortened and catchy version of Olive Ridley.

The fancy name was proposed by Durgesh Singh, an engineer turned wildlife photographer, who has been passionate about the endangered species for long.

“I am a naturalist. Wildlife has been my special interest in photography. When I came across a tweet asking for suggestions for naming the mascot for the Athletics meet, I instantly came up with the name ‘Olly.’ I wanted the name to be short and simple like Appu, the mascot for the 1982 Asian Games,” says Durgesh, who has completed B Tech from KIIT University. He, however, has no formal training in photography.

“In 2004, I came across dozens of carcasses of turtles close to Gupti, Bhitarkanika. That was my first proper wildlife trip and I was shocked by the mass deaths. Eventually, as my interest developed, I researched about it. Last year, I successfully completed watching the full cycle of Olive Ridley nesting. It’s such a unique phenomenon and makes me feel very lucky that it happens in our backyard,” he says.

With the Olive Ridley turtle becoming the mascot for an international event, he hopes it will create awareness about the species among people.

“It is very sad that thousands of these turtles die every year due to human negligence. Though things have improved in Odisha in terms of Olive Ridley protection and awareness, we still have a long way to go in order to ensure minimal human interference. I hope the projection of the issue on an international platform will go a long way in spreading the conservation message.”