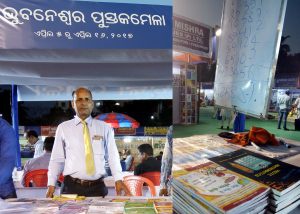 By Tazeen Qureshy: Did your teacher ask you to multiply two numbers? Then, don’t multiply, rather divide them. Were you asked to add five numbers? Multiply them instead. And if anyone complains, scream ‘Meri Marzi’ like actor Govinda and show off your dancing skills! Confused? Well, meet Shivnath Bihari, a teacher by profession, who uses innovative and crazy methods like ‘Govinda style, Shahrukh Khan style and Gandhigiri’ to teach mathematics to students.

Currently in Bhubaneswar to participate in the 33rd Book Fair, he stands out from the crowd. Scribbling large numbers on the white board, his demonstration is poetic, often referring to Bollywood stars and cricketers. Besides, he also has Hindi proverbs like ‘Kahin pe Nigahein, kahin pe nishana’ among his 250 odd maths tricks.

“Teaching was in my genes. My grandparents were teachers, so were my father and uncles. I was brought up in rural Bihar, and in villages, anyone who knew English and Maths was considered an intellectual. So, in my family, we ensured all the children knew both subjects well,” says Shivnath, who has an Honours in English but serves as a Mathematics Resource Person in the Central Government.

His tryst with teaching began while he was a student in standard three. “My uncle was the headmaster in the school I studied. The teachers knew very well that I a mischief monger. So, to avoid nuisance, they would ask me to teach lower class students. That was my first brush with teaching profession,” says Shivnath, who has now spent more than 30 years in the profession.

On what encouraged him to adopt such methods for teaching he says, “I have met many students who are scared of maths. The reason why students don’t like the subject is primarily because they are not interested. So, I started developing games and adopting strange methods which would arouse curiosity among them. Once there is curiosity and interest, the student will eventually start liking the subject,” says Shivnath, who has two President awards to his credit.

Besides holding workshops all over the country, Shivnath has coordinated the release of over 40 books in different subjects and has a special handbook of these Mathematics tricks. “Honestly, I am no Aryabhatta. I have blended Vedic mathematics with traditional teaching and derived an innovative concept altogether.” Shivnath will be conducting a Mathematics session, which is open to all on April 16.