About 450 boys and girls of Marwadi Yuva Manch worked relentlessly during this social work voyage.

FeaturesMiscellany
By Himanshu Last updated May 24, 2019 0

Bhubaneswar: After the extremely severe cyclone Fani hit Odisha on May 3 and devastated many districts of the coastal belt the tough job was the relief and restoration. The wreckage was so huge that it affected more than 10 million people in 46 towns and 14,835 villages. Though normalcy is yet to be accomplished, so far the affected areas and cyclone victims have managed to emerge from distress to a considerable amount. And to attain this state not only the Government operated organisations, but many other social workers’ group have contributed much. In this context the social services rendered by the Marwadi Yuva Manch of Bhubaneswar deserve commendation.

Extending their helping hand Marwadi Yuva Manch, a group of young people, initiated their voyage (of helping out the cyclone-affected victims) from May 4 and provided voluntary services till May 18. They distributed food, glucose, mosquito coils and drinking (mineral) water, provided dinners to the NDRF members, donated blood and helped others in the rescue operation. Importantly, this team was the first to reach out a few villages to provide relief materials. 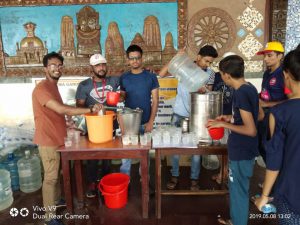 Saket Agrawal, vice president of Marwadi Yuva Manch, Bhubaneswar said, “On May 5, our members stayed at the Marwadi Bhawan and provided dinner to 100 members of the National Disaster Response Force (NDRF).  We also visited houses of our fellow members in the nearby cyclone affected villages to help and assess the damage.”

“On May 6, our members distributed about 300 jars of water of 20 liters each in hospitals and slums. We also provided dinner to 100 NDRF members,” he added. 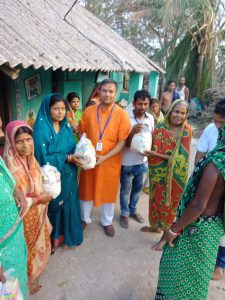 Asked whether there was no arrangement from the government to provide food to the NDRF team he replied, “They were provided with money to consume food. Yet, then no hotels or restaurants were open. And even families were in distress. Hence, although they had money, they had no option left to buy cooked food and so we provided them food for eight consecutive days. After that, the NDRF members thanked us and said that now they can manage at their own.”

Munnalal Agarwal, president of Marwadi Yuva Manch, Bhubaneswar said, “On May 7, our members distributed about 300 jars of water of 20 liters each and provided dinner to 100 NDRF members. On the next day, we distributed 7000 glasses of glucose water at Bhubaneswar Railway station in the morning and in the evening. Another team distributed 400 food packets at the Dhirkuti slum in Mancheswar area besides 25 cartons of mineral water.”

Nayagarh: Class IX student makes e-cycle that can run up to… 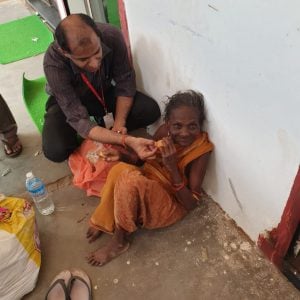 “On May 9, the Manch distributed 8000 glasses of glucose water at Bhubaneswar railway station while another team visited Bamuna village near Nimapada and distributed 450 food packets and 50 cartons of mineral water,” he added.

Vice president of Marwadi Yuva Manch Vikas Bethual said, “On May 10, one of our teams distributed 5500 glasses of glucose water at Puri railway station. Then, there was no drinking water available in Puri. And for this, the station master admired our effort. On the same day, another team of the volunteer group visited Motari, Delanga and nearby villages and distributed 600 food packets, 2 cartons of mosquito coils and 50 cartons of water bottles. On this day, our members were the first to reach some villages with the relief materials.”

“On May 11 one of our teams distributed 4800 glasses of glucose water at the Puri railway station when team 2 visited a few villages near Kanasa and distributed 450 food packets, 2 cartons of mosquito coils and 30 cartons of mineral water,” he added. 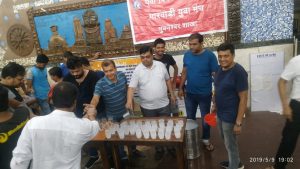 Aman Anshuman, secretary of the group said, “Our volunteers were approaching door to door and handing over relief materials and food only to those who were actually in need. On May 12, we distributed 7000 glasses of glucose water at the Puri railway station while another team visited Alarkud near Bramhagiri and gave away 100 food packets, 40 cartons of mineral water, 4 cartons of cake and 4 cartons of biscuits besides 100 pieces of polythene.”

“On our way to Puri, we provided about 500 bottles of drinking water to the workers who were erecting electric poles under scorching sunlight. And our members provided both lunch and dinner to a team of 250 NDRF members on that day,” said Brij Mudra, treasurer of Marwadi Yuva Manch, Bhubaneswar.

Asked what inspired him to go for this tough operation another member Shalin Agarwal said, “Nothing can replace the satisfaction of serving others.”

Fire Breaks Out In Dumping Yard In Daruthenga