Lord Jagannath is in chains here! 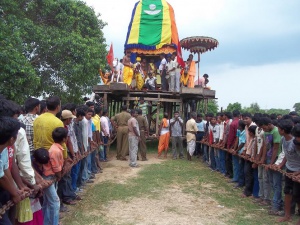 Kendrapara: Lord Jagannath in chains!! It certainly sounds incredible, but is true nonetheless. Villagers of Kakatpur keep the Lord in chains throughout the year and even draw his chariot on Ratha Jatra day with iron chains rather than the ropes made of coir that is used in other places, including the world famous Car Festival in Puri. The reason: they fear the Lord might run away if they don’t tie him up in iron chains!

The people in the seaside village of Kakatpur under the Badihi gram panchayat of Mahakalpada block in the district have kept alive the tradition for at least three centuries and yesterday was no different. Amid much fanfare and religious fervour, the villagers of Kakatpur pulled the chariot with iron strings to the Mausima temple on the auspicious day of Sri Gundicha.

It is not just on Ratha Jatra day that the Lord is kept chained with iron ropes. A visit to the temple reveals that though the idol of Lord Jagannath is tightly installed in his citadel, its is tied up with iron strings that are affixed to the  rear of the citadel. Apparel covers up the symbol of captivity to give the divinity a dignified look. 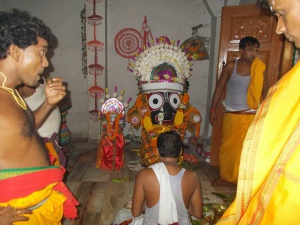 “Legend has it that Lord Jagannath had travelled to Kakatpur during the 18th century from the seaside village of Champagada, earlier located near the  Satabhaya coast, which was under the tyrannical rule of the local Zamindar at the time. Lord cursed the despotic ruler and left the place After a day, the curse of the Lord came true and the sea ate up the Champagada village completely,” said Sarat Kumar Sahu, the temple Trust Board member.

“Scared that they too might face a similar fate if they unleashed the Lord, the god fearing people of Kakatpur put Him in iron chains in the citadel. Since then, the Lord has remained chained here,” said Brahmananda Swain, a villager.

“Though we have become modern in our thoughts, when it comes to God, we keep unflinching faith on Him and His creation,” said the temple priest Shatrughna Dash.