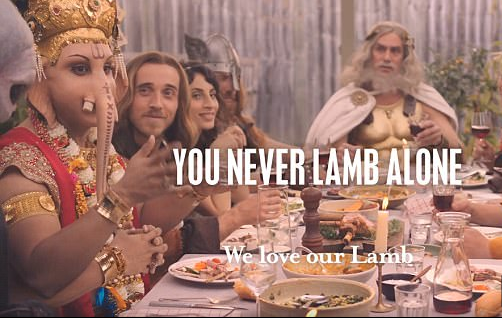 An advertisement by Meat and Livestock Australia (MLA) for lamb has turned controversial after Hindu groups termed a picture of ‘Lord Ganesha’ shown eating lamb in the ad as ‘insensitive’ to their community.

As per MLA’s marketing manager Andrew Howie, the commercial intended to show that “no matter what your beliefs, background or persuasion, the one thing we can all come together and unite over, is lamb.” The ad, released on Monday, was referred to the Advertising Standards Bureau for lacking sensitivity the very next day.

This controversial advertisement also features Moses, Aphrodite and Zeus among the Greek Gods, Buddha, Ganesha, Obi-Wan Kenobi (fictional character from Star Wars), Jesus and Ron Hubbard (founder of Scientology) sitting together at a Barbeque. Muhammad is the only God missing from the table and Zeus insolently asks why Muhammad never turned up for the barbecue. Jesus is seen with other Gods, enjoying the lamb lunch with an atheist announcing ‘What about we toasting to lamb, the meat we can all eat?’

The ad has led to a huge backlash and the ‘You Never Lamb Alone’ campaign has been termed as senseless. The ad, which was supposedly made to foster unity, has done the exact opposite with religious groups demanding it be taken down.  The Indian Society in Western Australia has asked MLA to apologise for the faux pas and bring it down. The Society has said that it was a cheap attempt to gain commercial advantage by mocking religious sentiments of million of Indians.

To this, the MLA’s response was “Our intent is never to offend, but rather acknowledge that lamb is a meat consumed by a wide variety of cultures and capture how the world could look if people left their differing views at the door and came to the table with open arms, and minds.”

4 of gang arrested while planning dacoity in Kendrapara