Sambalpur: For many the Hirakud dam in Sambalpur district of Odisha is just a tourist place. It hits the headlines when several sluice gates of the dam are opened to release flood water.

Hirakud dam has also been in news due to the conflict between Odisha and Chhattisgarh over the distribution of water from Mahanadi River on which the dam has been erected. The problem surfaced in 2016 when Odisha alleged the existing and proposed dams and barrages in Chhattisgarh will dry up the river down-streams and affect Odisha’s people, industries and ecology.

However, besides these factors, there are many emotional occurrences behind the coming up of the dam. Many people had to leave behind their houses and lands as well as profession so that the dam can come into existence. And hence, a lot of emotions are linked to the dam project.

Of course, it is true that to get something we need to sacrifice something. Yet, the sacrifice that some people made for the Hirakud project cannot and should not be overlooked, because in lieu of their sacrifices, now many districts of Odisha are getting illuminated and irrigated.

As per old sayings once upon a time diamonds had been found from this place. And hence comes up the name Hirakud. Hira means diamond in Odia language. 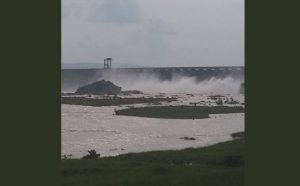 These days though diamond is not found in Hirakud, the value of whatever benefits the State is getting from this dam, like electricity and irrigation, is not less than worth of diamond.  However, now the dire need of the time is safety of the dam.

The artificial lake area of Hirakud dam is spread over a large patch of 743 square Km. Hirakud is the longest earthen dam in the world. The length of the total dam is 25.8 km while the length of the main dam is 4.8 km. The total number of sluice gates here is 64 and crest gates is 34. Maximum flood water release capacity is 42,450 cubic meters per second.

Erstwhile PM Jawaharlal Nehru had laid the foundation stone for the dam on 12, April 1948. Ten days ahead of that on April 2, 1948 the process of evacuation of the residents of 294 villages started. More than 22000 families had to leave their place of birth for the project.

Initially, 24 families of Jamada village were evacuated. Out of the total 294 villages, 116 villages along with the houses and lands completely submerged in water after the dam came into operation.

Some of the displaced people were rehabilitated in new places where earlier it was forest. Some others moved out to other districts.

Not only houses, but many temples in the said villages also sub-merged in water. As per reports, about 112 temples were sub-merged. Interestingly, during summer when the water level recedes the pinnacles of these temples become visible. It is truly said, ‘Jale Dwarka Nasa Jiba, Mora Nibas Matra Thiba’ (Dwarka, the kingdom of Lord Krishna will submerge, but His abode will be still there).

Now, the huge Hirakud dam is standing. However, the villages that submerged in the water of the dam as if also lost the culture. There is memory, some experience but the protest is not there. There are still some living people who had been affected due to displacement. Some others have died. Many dynasties have lost their identity for this project. But the people who had been displaced from their birthplaces should be rehabilitated. Hirakud dam is the first ever dam in independent India. It is one of the first major multipurpose river valley projects started after India’s independence. Earlier, when Hirakud dam was not there, massive floods were affecting coastal Odisha every year. The main purpose of the Hirakud Dam was to check these floods that were affecting a large part of coastal Odisha. Accordingly, Hirakud dam had been conceptualized. The dam was constructed to help alleviate these problems by creating a reservoir and controlling river flow through the drainage system. The dam regulates the flow of the Mahanadi River and produces hydroelectricity through several hydroelectric plants. Another major aim behind Hirakud dam project was production of electricity and to develop irrigation facility.

Finally, the work of the dam started. It took about 10 years to be completed. Hundreds of villages became history. After the dam came into operation, electricity was generated. Two canals, in Sasan and Bargarh came into existence that provided wide irrigation facility. Water was also released through the Hirakud distributary that provided irrigation facility to the local area.

After the dam was constructed, now big question is regarding safety of the dam. Due to soil erosion the holding capacity of the reservoir is decreasing. Now the dam is 65 year old. And within this long 65 years, only once effort had been made for removal of sediments. That is also from near the canal at Sasan.

On the other hand some researchers are of the opinion that removal of sediments from the reservoir is not so easy. It will take about 4 to 5 years. And for that for once it is required to completely dry up the reservoir.

Since 1980 along with other industries a lot of coal mines are operating in Sambalpur and Jharsuguda districts which led to deforestation. It is said to be one of the reasons for sedimentation.

As per a survey made in 1991, about 12.90 million ton of soil gets washed away every year in the catchment area of Mahanadi. Out of this 38.63 portion that is 4.98 million ton get flowed. The rest 7.92 million ton enters the reservoir and makes the sediment. And hence the water holding capacity of the reservoir is reduced. By October 31 the reservoir should have 630 feet water level. Yet, last year during flood the water level broke record of last 10 years and reached up to 629 feet.

The people who are yet to be rehabilitated sometimes hold protests to press their demand. However, as if their protest has disappeared in the water of the Hirakud dam reservoir. On the other hand the district administration has said that it always made effort towards settlement of the displaced people while the government is always trying for their development.

Now, it is responsibility of the current generation to tackle the safety concern of Hirakud dam. People of Odisha shall reap benefit till Hirakud dam is there. And if any big problem surfaces regarding safety of the dam, due to negligence, it surely will lead to larger problems. Hence, it is time to look into the safety of this dam. It is duty and responsibility of the local administration as well as government to take care of the problems of the people who made the sacrifices, the displaced. It is still astonishing, how come even after 65 years, the problem has not been solved.