Experts speak on ‘Cinema in the age of OTT’ at Filmi Chakkar 3 in IIMC, Dhenkanal

OTT and technological disruptions will continue to impact cinema, say experts and scholars 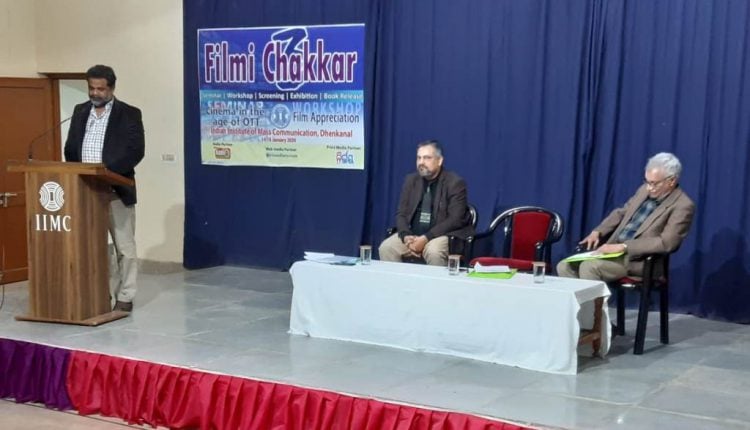 Technological disruptions are changing the lifestyle of the people and that has changed the way films are produced, distributed and watched. Noted film director Himansu Khatua said while inaugurating Filmi Chakkar-3 at Indian Institute of Mass Communication in Dhenkanal on Tuesday.

The three-day film-related event was inaugurated in the eastern Indian campus of IIMC with a day-long seminar under the theme: Cinema in the Age of OTT.

Speaking at the inaugural session, head of KIIT School of Film and Media Sciences, Himansu Khatua said, “Though technologies in film making and screening at theatres have been changing at a rapid pace to compete with the digitised world, Over-The-Top (OTT) platforms will not give the pleasure like what we get from watching it on the big screens in the cinema Hall. There is a difference between studying at home and studying in a school.” 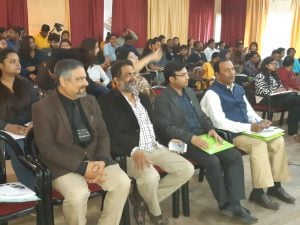 OTT is the new medium of streaming films and other video and audio content bypassing the traditional medium of satellite or cable television. In these platforms like Netflix, Hotstar, Amazon Prime Video, films are streamed directly to the consumers using internet services. These platforms are popular among the youth and they are consuming the OTT content through mobile phones. The speakers and the paper presenters in the seminar deliberated on various aspects of this medium and its impact on cinema.

While sharing his experience, renowned author and former director of IIMC Amaravati campus, Nadim Khan said, “People interest in watching movies in the cinema hall has changed with time. Earlier the film buffs used to queue up before the cinema hall to grab a ticket four days prior to the release of a movie and they would rigorously discuss over the film. They loved watching a movie together in one place. Social viewing extended a feeling of togetherness. However, the scenes started changing when TV channels started producing serials. The seeds of OTT was sowed with the emergence of TV serials in the late 80s and 90s. Since then people got the taste of consuming entertainment content sitting at home. The same habit has been turned into viewing content on mobile and through OTT platforms now.” 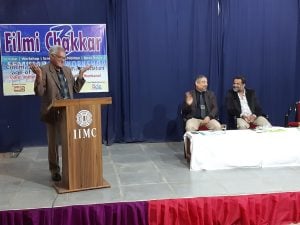 The regional director of IIMC, Dhenkanal, Dr Mrinal Chatterjee in his opening remarks brought the analogy of sagar manthan. “Here is churning as it happened during samudra manthan when the nectar of immortality was taken away in the heaven and the poison was left for the asuras. Similar churning is taking place in today’s entertainment industry with the emergence of new technologies. Both amrita and garala are available in the market and it is up to the creators and consumers to decide what they will pick up out of the churning in the age of OTT.” 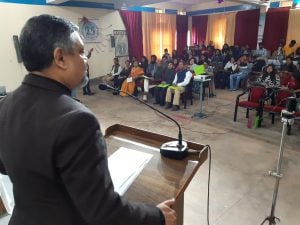 Issues related to consumer behaviour, the pattern of storytelling, changing characters of the films, the impact of OTT in regional cinema were discussed in three technical sessions.

Kolkata-based filmmaker and assistant professor of St. Xavier’s University, Utsav Chatterjee, with examples of various films, explained how the storytelling format is changing with the advent of OTT. “In the OTT content harsh reality is being portrayed and the films and web series are showing the life as we experience it and this reality is reflected in characters to dialogues,” he said.

The OTT platforms have also brought focus on character actors rather than typical Bollywood heroes as has been seen in Family Man starring Manoj Bajpayee and Shefali Shah’s Delhi Crime. Explaining the phenomenon, film critic and author Dr Piyush Roy said, “Now under-explored actors in Bollywood are turning out to be the focus of the OTT platforms. There is a democratization of opportunities for creators and actors due to the emergence of this new platform. Even women writers, directors and actors are getting a chance to make their mark.”

Dr Jayanta Kar Sharma, head of the Hindi department of Government Women’s College, Sambalpur, stressed on the need for more regional content on the OTT platforms. “With cheap internet, the demand for OTT content on smartphones has increased and the streaming companies must produce original content in regional language to tap this increasing audience.

On 15 and 16 January, Dr Piyush Roy will conduct a film appreciation workshops and there will be a screening of various films as part of Filmi Chakkar 3.

The first comprehensive monograph in Odia on Public Relations and Corporate Communications was released on the first day of Filmi Chakkar 3. The monograph contains history, model, strategy, practical and ethical aspects of PR and corporate communication. It also discusses the education and available career options in this particular field. It has been written by Dr Mrinal Chatterjee, professor and regional director of IIMC and Somya Ranjan Bihara, academic assistant.

A compilation of the weekly columns of Dr Mrinal Chatterjee Jagate Thiba Jetedina was also released on the occasion. It contains the columns written in Odia for Samaja Saptahika during 2019. The cover of both the books was designed by the academic coordinator of IIMC, Jitendra Pati.