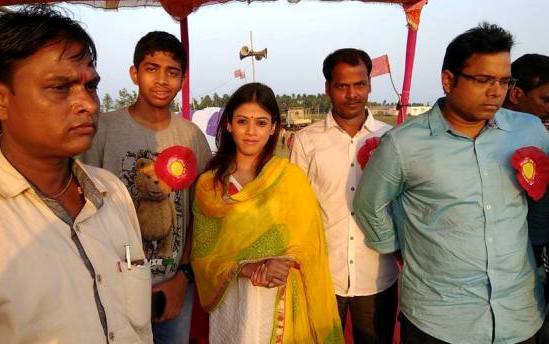 At 20, she has immense aggression, is full of fire and raring to go. Upasna Mohapatra, daughter of the late Congress leader Lalatendu Bidyadhar Mohapatra and great granddaughter of Buxi Jagabandhu Bidyadhar, the revolutionary leader who spearheaded the Paika revolution, is the new entrant in politics who has managed to create a buzz at a young age.

Months after the death of her father, a noted Congress leader known for his connect with the youth, Upasna has now taken up the baton and is slowly trying to fill up the huge vacuum. In the recently concluded Panchayat Polls, she and her uncle actively campaigned for Congress.

She has turned media savvy too, openly taking on controversial issues. She might be too young for 2019 elections, but Upasna does not shy away from expressing her willingness to actively enter politics soon.

“I am currently at a learning stage. I am being groomed by experienced leaders. For 2019, I will be supporting my uncle. In 2024, if given a chance, I would definitely want to actively enter the political fray,” she says.

In the last two months, Upasna has geared up socially and politically, making her presence felt. After Dharmendra Pradhan and Chief Minister Naveen Patnaik, she too joined the beeline of high-profile personalities visiting the Budhi Thakurani Yatra in Berhampur. In fact, Upasna managed to create more buzz than even Congress State President Prasad Harichandan. A few days back, she graced a cricket match as a Chief Guest in Brahmagiri, her father’s base.

“I have never been intimidated by politics. In fact, my father had always been very involved with the people and perhaps he just passed it on to me.”

Upasna’s growing clout is visible and her increasing political and social appearances clearly make her the new face in Odisha politics. However, whether she will be able to keep the spirit and fan following of her father alive, only time will tell.