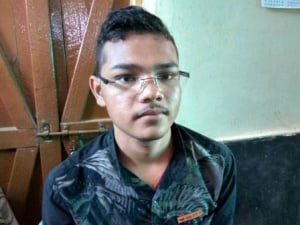 Koraput: Beating all odds, tribal boy Pradeep Himirika from the remote Uduguda village in the Naxal hit-Koraput district has topped in the STPwD category of JEE entrance and has become an example for others.

Himirika, who has been affected with polio since childhood, has secured 114 marks in the JEE entrance and has got third rank in the STPwD category in JE Advance.

Himirika hopes to get an opportunity to study in any of the IITs in the country. He also wants to be an IAS officer in the future.

He did his schooling at the primary school in his village. He then moved to the Jawahar Navodaya Vidyalaya​, Bissamcuttack and passed the tenth exam with first division.

After noticing Himirika’s talent and interest in studies, some people supported him economically which helped the tribal boy to pursue his studies in Jawahar Navodaya Vidyalaya in Kottayam, Kerala. He passed out from there with 91.8% marks.

Though Himirika wants to fulfill his dream of studying in any of the IITs in the country and become an IAS officer, money has become a hurdle for the son of a daily wager. So, he has requested some Good Samaritans to fund his studies.

“I had appeared the JEE entrance test in the STPwD category this year and topped in the category. Besides, I got third rank in the STPwD category in JEE Advance. I am interested to study more and become an IAS officer in the future. But my father, who is a daily wager, cannot afford my studies. So, I request the government or some people to support me economically,” said Himirika.