Born with disability, Prashant is a winner today 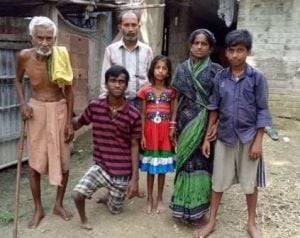 Balasore: Folding his hands in a ‘namaste,’ Prashant Rout, bows down his head to match the tunes of ‘Vande Mataram.’ The children surrounding him watch in rapt attention for a few seconds and then join in to match his dance steps. He has been their ‘Guru’ for quite some time, but the children are awed each time they see him perform.

“We were deeply saddened when we got to know about Prashant’s disability. He was totally dependent and I had to carry him on my shoulders wherever he went. As he grew up, he decided to live life on his own terms and eventually mustered courage,” says Suryakanti, his mother.

Watching the neighbouring kids play and dance , Prashant wanted to be one of them. He eventually did and in fact became an example for others. Today, he can dance, play cashio and also climb tall trees.

“Every child wants to fulfil his parents’ dream. I too felt the same. So, I mustered courage and tried to be like any other child. I have already cleared plus two examination. Now I plan to enrol in BJB College for higher studies,” says Prashant.

Prashant has participated in several dance competitions and received appreciation and accolades. “Besides getting Rs 45,000 from the Government under ‘Mo Kudia’ scheme, we have not got any support. I just want the Government to help my son to become self-sufficient,” says Suryakanti.

(With Inputs from Saroj Kumar Barik)