Bhubaneswar: The famous Chandan Jatra of Lord Lingaraja in Bhubaneswar of Odisha is celebrated for 22 days starting from the Akshay Tritiya.

Akshay Tritiya is an Agrarian festival that marks the commencement of agricultural activities in the state. The day is considered auspicious for starting of any good thing. 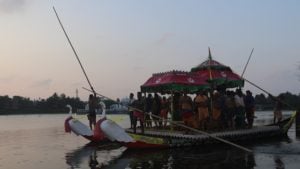 The Chandan Jatra gets organised in many temples across the State where the movable idols (representative idols) are taken in procession to the designated water bodies where the idol are make to sit and the water game continues. Reportedly, the facts, regarding the Chandan Jatra of Lord Lingaraj have been mentioned in the ‘Ekamra Chandrika’ book.

On the first day of the festival, after the Bhoga mandapa rituals, the Surya puja and Dwarapaa puja are performed and then the Pankha laagi niti goes on. The rituals are performed by the Puja panda and the Palia Badu. The puja panda holds the pot that contains the sandal wood paste and perform the ‘Bedha parikrama’. 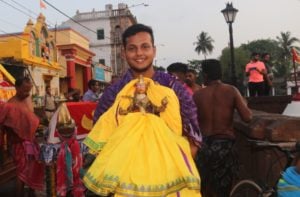 After the Snana, the holy bathing of the Lord, the Puja Panda applies sandal wood paste to the body of the Lord. Then the Palias attire the Lord.

Later, the panaa bhoga is offered followed by the ‘Ballava Bhoga’. Then the miniature idols are taken in a procession for the boating. These idols are Lord Lingaraj, Goddess Durga and Parati and Lord Basudeva. These idols are placed on the Palanquin  and kept in the Natamandira.  Later in the afternoon the lords go for pahada after the dhupa niti. Also, special dwarapala puja, Surya puja and mahasnana are done only on Akshaya Trutiya.