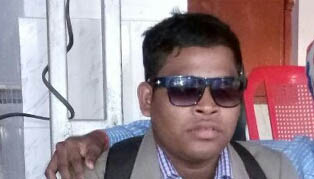 For the last two years, earphones had been the constant companion for Chinmay Kumar Dhal. The visually impaired plus two Arts student of BJB Junior college couldn’t imagine staying away from his ear plugs for long. As the Plus Two examination approached, he kept listening to the audio over and over again.

His hard work paid off handsomely. Not only did he clear the examinations with flying colours, he also grabbed a spot in the Top-10.

Chinmay has never been deterred by the fact that he is visually impaired since birth. A studious child from his school days, Chinmay, who hails from Jajpur district, had always dreamt of making it big in academics. With a score of 511 out of 600 (85.1%), just 28 short of the topper, Chinmay had the honour of becoming the first visually impaired student to get into the Top-10 list.

“I was always confident of doing well. But I had not expected to break into the Top-10 list. It was indeed a surprise for me and my parents,” Chinmay says. Notwithstanding his scarcely concealed joy at this unexpected performance, however, Chinmay feels he should have got better marks in English.

Chinmay had been studying with the help of books recorded by his family and friends or read out by his father. Towards the end of his first year in BJB College, he learnt about We4You, a voluntary organization that supports visually impaired students with free supply of audio books.

“Earlier, my father would read out a book to me or I would ask my friends to record portions that I needed. But, when I learnt about We4You, I requested them to record a few books for me. Their volunteers took the pains to record those books and send it to me. While the credit for my success certainly goes to my parents and friends, the support of We4You has been invaluable,” says Chinmay.

An inspiration for many, Chinmay wants to become a lecturer in future or crack the civil services examination.

For the volunteers of We4You, it is a moment to cherish. “We have been supplying audio books to more than 15,000 visually impaired students annually. But, after making it to the Top-10 list, Chinmay has become an inspiration for all of us. There is immense satisfaction that we have been able to support somebody in achieving his dreams. This has given us the zeal to work harder,” says Abhay Mohanta, co-founder of We4You.