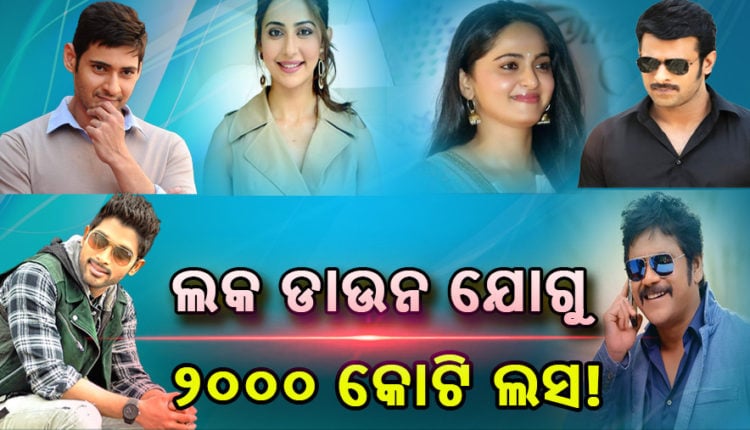 Hyderabad, April 29 (IANS) Coronavirus has come as a blockbuster blow for the Telugu film industry, the second biggest in India after Bollywood, as films valued Rs 2,000 crore either ready to be released or in production have been stuck for over a month.

With no chances of an early end to the crisis, the industry is not only staring at massive losses but also fear loss of over 70,000 jobs in production, distribution and exhibition departments.

Like many other industries and every film industry in the world, the coronavirus outbreak and the resultant lockdown brought everything to a standstill in Tollywood, as the Telugu film industry is popularly referred to.

“Production varies from a film like RRR which is Rs 400 crore plus film to many films which are in the hundred crore bracket and a lot of films in the Rs 20-30 crore bracket. There are many with a budget of Rs 3-5 crore. There is quite a big money stalled. May be in production alone projects worth Rs 2,000 crore are stalled,” Suresh told IANS.

The big banner movies stuck include ‘RRR’ of S.S. Rajamouli of ‘Baahubali’ fame. Starring Ram Charan and Jr. NTR in the lead roles, it is expected to be another magnum opus from Rajamouli.

Superstar Chiranjeevi’s ‘Acharya’ is another big banner movie stuck due to lockdown. Movies of leading stars like Balakrishna, Allu Arjun, Vankatesh and Ravi Teja have gone behind schedule. Most of them are Rs 30-40 crore movies.

The lockdown has brought all the production, distribution and exhibition activities of Suresh Productions to a grinding halt. The company had four films under production ‘Narappa’, ‘Virata Parvam’, ‘Crush’ and ‘Krishna and his Leela’ and it had planned three other movies.

“It’s not just films under production which are hit. My all three studios and 250-300 screens all are shut. The losses are huge,” said Suresh.

He pointed out that 1,800 cinema theatres are the worst affected by the lockdown.

Deepika to star opposite Mahesh Babu in Rajamouli’s…

Second largest film industry in the country after Hindi, Tollywood makes 250-275 movies every year. About 175 films are made in Telugu while about 100 films are dubbed from other languages. The budget varies from Rs 1-2 crore to Rs 200 crore, pointed out the ace producer.

Every year 25-30 Hindi movies are made with Rs 100 crore budget while the number of Tollywood movies in this bracket will be around 12. Tamil industry ranks third in this category with 3-4 films.

Many low level non-technical jobs and even mid-level managerial jobs are likely to go. Things may change even for outdoor shootings with less number of people handling the work. Huge joblessness is also feared in distribution and exhibition with cinema theatres resorting to lay-offs.

The producer does not expect things returning to normal in the industry till the vaccine or drug is made for COVID-19. “I don’t think too much is happening. It could be a low of 6 months to high of 12-15 months.”

“All depends on when the vaccine and medicine will come. That’s when we are fully done. If the process of developing vaccine or medicine is slow then some small shootings and some post-production work can happen. The films may have to be released through OTT (over the top) or some other platform.”

Creative Producer Venkat Sidda Reddy believes that Tollywood will make a comeback. “The film industry has seen so many ups and downs and I strongly feel that there will be a comeback. The looming uncertainties of shooting schedules, theater occupancy and the competition with the OTT platforms are definitely going to be major challenges but every challenge is also an opportunity,” Reddy told IANS.

“With this sudden downward trend, the budgets will become smaller. With smaller budgets, shoot schedules have to be very well planned and we will have to find ways to work with smaller crews and shorter shooting schedules. This is a good opportunity to use technology and device processes that are lacking in the industry,” said Reddy.

He believes that the low budget films with genre specific films will have worldwide reach on OTT platforms. There will be a lot of opportunities in the OTT platform for newer ideas.

“With theaters closed and everyone binging on OTT, the producers, distributors and exhibitors now know the real impact of OTT on films. So there will be a huge paradigm shift and as a supporter of Indie cinema, these challenging times are going to open doors for more opportunities,” he added.

Earth is currently going through 7th mass extinction, not…

Odisha: Half burnt body of girl recovered from cemetery in…

WhatsApp is reportedly working on a mute shortcut for…