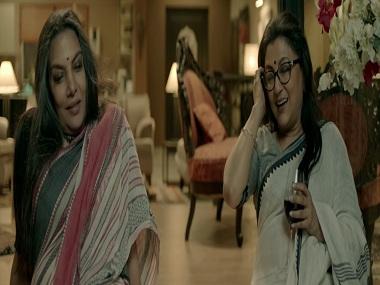 The trailer of Aparna Sen’s English film Sonata starts on a great note. An establishing shot of the Mumbai skyline is shown as Shabana Azmi says, “we all live in boxes.”

Those five words define the lifestyle of a metropolitan dweller who lives in a cubicle both literally and metaphorically. The large number of buildings indicate the presence of thousands of people but their interaction is limited to their box. An aerial view of Mumbai feels like a ceiling view of a factory store room.

Three women, played by Sen, Azmi and Lillete Dubey, attempt to penetrate those boxes and mingle with each other. They discuss each other’s vices, guilty pleasures, predicaments, lost love and other issues that govern one’s midlife crisis. Azmi looks glamorous and as she says, her mantra of living life with abandon makes for a large chunk of that desirability.

Dubey looks at her carefree best and Sen balances the unhinged approach of the other two with some much-needed restraint. She seems to be the pacifier but ends up indulging in some guilty pleasures of her own.

While on paper, this female buddy film may prove to be indomitable, the disjointedness of the trailer hints at the fact that it may falter in its execution. With three talent powerhouses, the film risks wasting them if it is as abrupt and incoherent as the trailer.

Years ago, yesteryear actors Hema Malini and Jaya Bachchan had expressed their concerns over the dearth of good roles for women of their age, onKoffee with Karan Season 2. While Sonata seems to have turned an ear to them, it may end up doing severe disservice to these seasoned veterans if it is not sound technically.