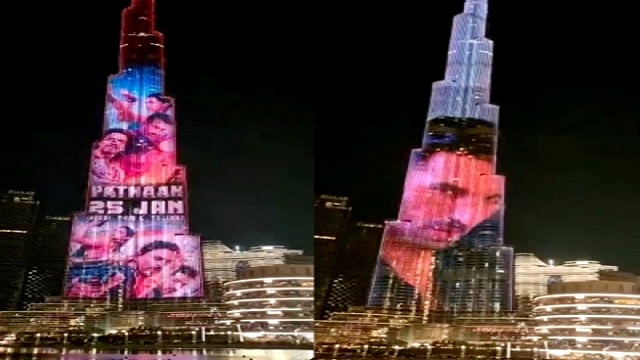 Mumbai:  As Bollywood superstar Shah Rukh Khan gears up for his upcoming spy-action thriller film ‘Pathaan’ and his return to the silver screen after four years, the makers of the film are leaving no stone unturned to establish a monumental buzz around the film.

The film’s trailer was recently shown at the world’s tallest building Burj Khalifa in Dubai. It didn’t take long for people to start talking about the trailer display at the monument – the name of the building is trending on Twitter.

Bollywood studio conglomerate Yash Raj Films took to Twitter to share a video and a few images of the trailer playing on Burj Khalifa. “When Pathaan took over the tallest building in the world #PathaanTrailerOnBurjKhalifa,” they wrote and posted a series of images. They also shared a video in another post.

Last night got even more 🔥 when Dubai was grooving to Jhoome Jo Pathaan – Arabic Version!

Celebrate #Pathaan with #YRF50 only at a big screen near you on 25th January, 2023. Releasing in Hindi, Tamil and Telugu. pic.twitter.com/faHfvDSEfP

The superstar too attended the display of the trailer at the venue. SRK looked dapper in a black t-shirt and matching pants. He layered his look with a black leather jacket and added sunglasses to accentuate his look.

Some fans’ pages have also shared videos of Shah Rukh Khan interacting with the audience and mouthing his dialogues from Pathaan.

In a viral video, SRK can be heard saying from the Burj: “Party rakhoge to mehman navazi ke liye Pathaan to ayega aur saath mein pataakhe bhi layega. (If you will host a party, Pathaan will obviously come and bring firecrackers as well).”

Gotta say it was quite a party last night! ✨ 🔥#PathaanTrailerOnBurjKhalifa

Celebrate #Pathaan with #YRF50 only at a big screen near you on 25th January, 2023. Releasing in Hindi, Tamil and Telugu. pic.twitter.com/RTzBnu0GFM

Custodial death in Odisha: Ranger along with 7 others…

Maoists kill BJP leader in front of his family in…