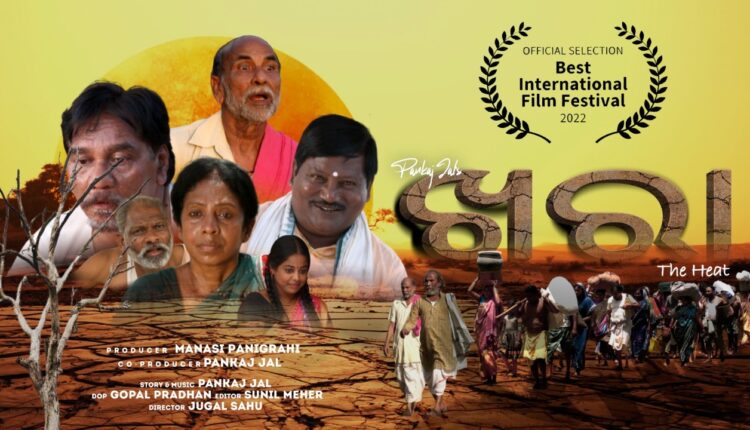 Balangir: Odia upcoming film ‘Khara’ that dwells upon the extreme heat wave condition of Titlagarh in Balangir district, has been officially selected for the prestigious Best International Film Festival 2022. After the super success of Babusan Mohanty acted Odia film ‘DAMaN’, ‘Khara’ is expected to earn appreciation of Odia film fans, because this film also is based on an original script and not inspired by any south Indian film.

Everybody are aware of the extreme heat wave condition of Titlagarh in Balangir district. Earlier, attempts had been made to take certain steps so that the very high temperature of this town might drop down but in vain. This extreme heat condition makes life difficult for many in this town while it becomes a tough job for them to live a normal life during summer. This has been dealt in this film.

The extreme heat condition has been reflected in music and earlier a popular song titled, “Titlagarh nei se ita Tatlagarh’ had been made, that had become a smash hit. The singer of this song Pankanj Jal has made ‘Khara’. His wife and singer Manasi Panigrahi is the producer of the film while the story and music is by Pankaj Jal himself.

Renowned cinematographer Gopal Pradhan is the Director of Photography (DOP) of the film who has earlier earned appreciation for his brilliant camera work in other films and music albums.

‘Daman’ and ‘Khara’ are synonymous as both the films dwells upon a chronic problem of the area. ‘Daman’ dealt how Malaria could be eradicated by a government initiative in the cut off area of the Maoist prone Malkangiri district of Odisha by the tough effort made by a young doctor. Similarly, ‘Khara’ showcases the problem that people of Titlagarh face during summer due to the extreme heat condition.

Horoscope for December 2, 2022: Know what stars have in bucket for you