Based on a short story written by noted writer Gourahari Das, the plot of 'Pratikshya' revolves around sorrow, happiness as well as failure and success of an Odia middle class family.

Odia film ‘Pratikshya’ is an excellent film. Based on a short story written by noted writer Gourahari Das, the plot of ‘Pratikshya’ revolves around sorrow, happiness as well as failure and success of an Odia middle class family. Roshan Bisoi is the script writer. Directed by Anupam Patnaik Dipanwit-Barsha has appeared as the lead pair while the other major roles have been played by Choudhuri Jayprakash Das, Siddhant Mohapatra and others.

Sanjay (lead character played by Dipanwit) and Kalyani (leading lady played by Barsha) are in love with each other. Unlike many other films, this love has earned nod of the family members.

Sanjay’s father is a State Government employee and Sanjay also is interested for a government job. He is appearing in interviews one after one with a hope that someday he would get a job.

Sanju’s sister earlier eloped with a boy but later returned home as the relationship could not last. Now, she works in a private firm. Sanjay’s father often complains of belly ache and loose motion. It seems he has some chronic health issues.

Once, when Sanjay and Kalyani are roaming in the city they were informed that his father has been taken to the doctor’s clinic as his health suddenly deteriorated. They rushed to the clinic and by then Bipin, Sanjay’s father (played by Choudhuri Jayprakash Das) has already been treated. The family returns their home, a government quarter near Kali temple behind Governor’s house in Bhubaneswar, in an Auto rickshaw. 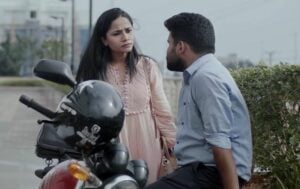 In the meanwhile Sanjay is seen appearing in interviews, spending romantic moments with Barsha and sharing his feeling with his friends.

After a few days Sanjay takes his father to a doctor for health check-up. This doctor is an interesting and jovial character. From his medical observation he finds nothing serious but since the loose motion problem of Bipin continues, he refers the case to a senior doctor, played by Siddant Mohapatra.

Later, Sanjay goes to hospital of the senior doctor who finds some lethal health issues of Bipin and thus advises for some major medical tests. Following the tests through a series of medical explanation the doctor reveals that Bipin is a victim of pancreas cancer. The senior doctor asks Sanjay to keep patience, be brave and also informs that Bipin is going to survive only for a month or two. He should be kept at home in his last days and he should be informed about his disease, the doctor also advises.

Meanwhile, once Bipin’s health suddenly deteriorates. And he was rushed to the hospital in an Ambulance. He was put in the ICU and after a day or two he was out of ICU as his health condition improves.

In the meanwhile Sanjay feels that he should urgently get a job to fulfil all his and his family’s need. Sometimes, in his dreams he visualizes that his father is dying and he is getting a job as his father died while still in job. Even, at the hospital, Bipin asks his close colleague that he is going to die, and once he dies his friend should make all arrangements so that Sanjay can get the job.

Then the plot moves through a number of twists and turns to finally land at a point when Bipin passes away.

‘Pratikshya’ is an excellent film. All the major actors have played their roles quite perfectly. Special mention should be made about Dipanwit, Choudhuri Jayprakash Das and Siddhant Mohapatra whose acting is very much perfect.

One can get the typical Odia feel while watching this film. The film seems to have been shot in and around Bhubaneswar only. And why not? The script is all about that. Lingaraj temple, Bindu Sagar, Sishu Bhawan chhaka and some other very much known places can be clearly recognized. This gives a perfect Odisha feel and it proves that the film has not been made in a studio using Chroma or any other latest tech. I mean the audience can relate not only to the characters on the screen but also to the locations.

The script is based on a short story and that story itself is a precious piece of work, which has been aptly executed to be made a fiction.

On the dark side, this film is a work for the class, and not for the mass. So, if you want some masala, action, item number or something like this while visiting the theatre, this is not the film.