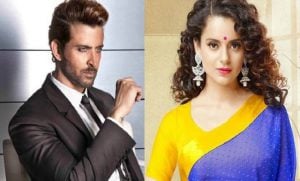 “I have been dragged into a dirty perverse mess without a choice in the matter. This is something that is not of my making. The truth is, I have never met the lady in question (Kangana Ranaut) one on one in my entire life. Yes, we have worked together, but there has been no meeting in private. That’s the truth,” Hrithik wrote in an open letter via social media on Thursday.

Hrithik stated that Kangana had wrongly claimed that he proposed her for marriage in Paris.

“My passport details show no travel outside the country in January 2014, which is the date that the alleged engagement supposedly took place in Paris. The only so called proof presented of this alleged “relationship” was a photoshopped picture in the media. This was immediately exposed the very next day by friends including my ex-wife. These questions are not even asked as we are taught to protect woman as we should. ”

Kangana Ranaut allegedly sent over 3,000 emails to Hrithik Roshan, some of which were reproduced by some TV channels this week, extracted from a police complaint filed by the Roshan’s lawyer Mahesh Jethmalani.