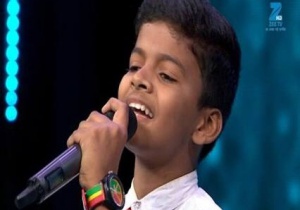 Mumbai: in a major heartbreak to his Fans across world, Odia teenage singing sensation Satyajeet Jena quit the Sa Re Ga Ma Pa Li’l Champs show on Zee TV, as his father confirmed pressure on his vocal chords.

While Satyajeet stood first yet again in voting and two other contestants Dhroon and Rita stood on the stage, facing elimination, Satyajeet’s father dropped a bombshell seeking permission to quit the show, saying his son’s voice is changing and going through a transformation phase.

His father wanted him take rest and return to Sa Re Ga Ma Pa challenge for seniors at a later stage. Judges too admitted that there was a lot of pressure on his vocal chord.

Satyajeet was asked to sing a parting song. When he started singing, whole audience had tears in their eyes.