Has Aamir Khan and Fatima Sana Shaikh secretly tied the knot? Deets Inside

Bollywood superstar Aamir Khan and Fatima Sana Shaikh spruced dating rumors after the star split with ex-wife Kiran Rao. Fans speculated that the separation was due to Aamir’s closeness with his Dangal co-star. Multiple reports came forward claiming that Mr. Perfectionist is getting married for the third time.

In the light of it, a picture of Aamir Khan and Fatima Shaikh has surfaced on the Internet, where it seems like the two have tied the knot already as the actress stands by Aamir posing as his wife, donned in a golden saree and wearing vermillion on her forehead.

A post with a picture of the two actors has gone viral, and it claims that Fatima is Aamir’s third wife. However, reports have confirmed that it is a morphed picture. 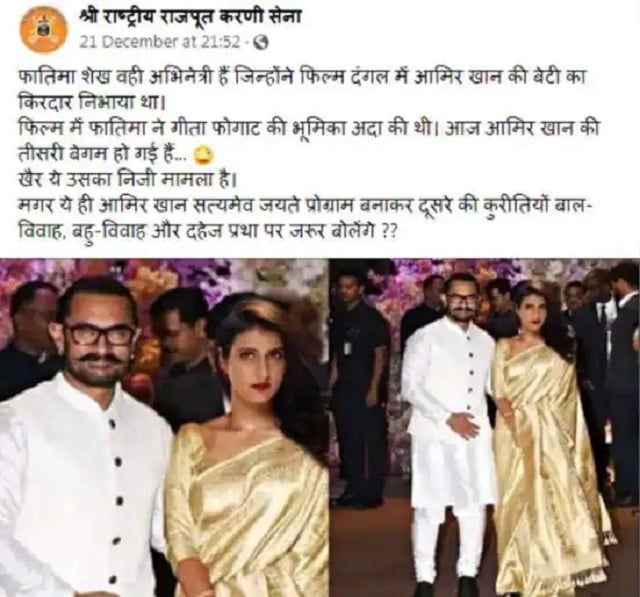 The original picture has Aamir and Kiran dressed up for Akash Ambani and Shloka Mehta’s engagement ceremony and the pic was clicked outside the venue as they posed for the paparazzi. In the viral photo, Kiran’s face is replaced by Fatima’s face. This makes it clear that Aamir and Fatima are not married. After Dangal, the two actors were seen together on the big screen in YRF’s Thugs Of Hindostan. Where Dangal was a huge hit, Thugs of Hindostan failed to make a mark at the box office.